It’s not quite time for the annual look at my exclusive Chicago Cubs Preview, but with pitchers and catchers reporting in five days and some recent optimistic and baffling comments by GM Jim Hendry, there is no time like the present to vent a little and clear my head prior to the weekend.  No one wants to suffer through a holiday weekend with this kind of angst burdening my soul.  As many know, my preview last year predicted exactly that the Cubs would win 83 games, which may have been luck or evidence of my prescience.

Chicago Cubs General Manager told the Chicago Tribune that he expects the Cubs to be improved because the current crop of players will play better.  That logic works for any sports team or business.  We need the current staff to improve their performance belies the lack of leadership that Hendry so fearlessly and so often exudes.

“We may do one more thing before camp or during, but we knew a couple of years ago this would be a year a lot the 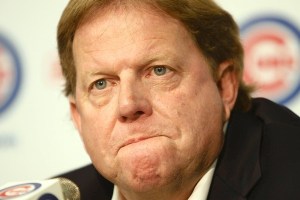 contracts we did would restrict us,” Hendry said. “But I feel good about the guys we’ve brought in. And, as I’ve said since the end of last season, we need a lot of the guys who didn’t play well last year to play better.”

“It’s not like we had a lot of room for new bodies,” Hendry said. “We just needed to get a couple of pieces, and we really think Byrd and Nady are going to help us in a lot of areas, especially offensively. And I’m optimistic some of the people that didn’t hit last year will. Rudy (Jamarillo, the new batting coach) is going to help us.  I think we’re quite a bit better.”

Doing the same thing with the same people and expecting a different result is moronic.  Again and again, the Cubs rely on players recovering from injuries as well as free agents signed following an option year statistical explosion.  Xavier Nady is recovering from Tommy John surgery (his second).  Ted Lilly is rehabbing his shoulder and isn’t expected to be full strength until just before the All-Star Break.  Marlon Byrd hit 20 of his 60 career home runs last season (in eight seasons).  Ryan Dempster had a career year in 2008, driving his price way up for the contract he signed prior to the 2009 season.  I could go on.

Where is any reasonable expectation for improvement justified.  The defense up the middle is pitiful.  Lou Piniella is losing his mind, and has evolved from being an angry tyrant to a forgetful and grandfatherly player’s manager.  He allows players like Alfonso Soriano the freedom to veto a move in the lineup, or at least claims to have gotten Soriano’s approval for the drop from leadoff to the six spot.  Even more absurd was Piniella’s insistence last season that Soriano hitting leadoff was only an issue once per game because he would likely only leadoff once.  I guess inheriting an out during virtually every other plate appearance because of the pitcher immediately preceding him is meaningless.

Ryan Theriot is a problem.  His lack of range at shortstop, mediocre arm, and soft bat make him a virtual replica of Glenn Beckert.  Beckert was a second baseman, the position Theriot is only somewhat suited for.  Cubs fans look at Theriot as one of the younger Cubs, yet he turned 30 in December.  Just so we are on the same page, here are the ages of the likely starters and other key players for the 2010 Cubs at the end of this season:

These guys are not at the point in their career, barring chemical additives, that baseball players get better or are injured less.  This team is old, and expecting improvement is irrational.  Hendry has built a team that cannot win, and is so hamstrung by terrible contracts that they have no ability to improve.  The Ricketts Family will write massive checks totalling more than $102 of their roughly $135-million payroll for Derrek Lee, Ted Lilly, Alfonso Soriano, Carlos Zambrano, Kosuke Fukudome, Aramis Ramirez, and Ryan Dempster.  The four position players on that list averaged 40 missed games.

Hendry is never going to come out and say that the Cubs will suck because that would mean his job, but to say that he expects improvement is asinine.  Hendry fans/apologists point to the six winning seasons since 2003 as reason to believe in Hendry’s ability to build a team.  With a $135-million payroll, Ronnie Woo-Woo could put together an 83-win roster.