As a guy who spent 11 semesters at Indiana University without a single advanced degree to show for it, my area of expertise became culture at IU.  That’s not the kind of culture on display in the Union or Museums, but the stuff that kids do to make the days between Summer and Christmas break pass a little more quickly.  My parents, whose hands spasmed every time they wrote a check to the IU bursar, can attest to my passion for the social aspects of life in Bloomington.

Things have changed a little bit over the years in Bloomington, but the overall mood of the students still is that of a group that embraces distraction.  My group of friends were experts in the art of distraction.  Some of these traditions might be a bit under the radar and certainly a few of them won’t be featured in any Indiana University approved publications.  Not that they are inherently antisocial or dangerous, but even Faber College would try to keep these out of the student life guide.

10 – Splashing the DGs as They Wait for the Bus 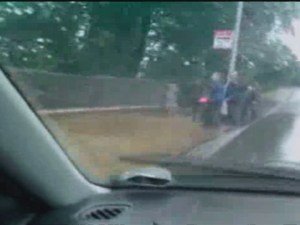 The drainage issue at the bottom of the hill on North Jordan may have been resolved at some point in the 1990s, but very little made us laugh harder than using the giant puddle that gathered each time there was significant rain to douse the Delta Gamma sisters.  There was always a wonderful and priceless look of resignation on the faces of the girls as they saw our car, sometimes filled with as many as eight boobs tired of pretending to study, barreling toward the puddle with the express purpose of violently displacing as much water as possible from the puddle on to the fancy designer duds and backpacks of the uppity sorority broads.

The best event of this type was a double dose of watery fun from two cars separated by roughly 50 yards.  Pauly Balst drove the lead car while I piloted the trailer.  There was one girl at the bus stop, and she saw Pauly coming.  A wall of water enveloped her, and she stood and screamed at Balst.  She turned just in time to see the second car only a few feet from the puddle.  Her demeanor changed instantly from rage to defeat.  Her head bowed, and shoulders sagged as the second wave crested at 10-feet before re-soaking her.

Gone are the puddles on Fee Lane near the Business School, but we hope that the streets and san staff have allowed the draining on Jordan to remain suspect so that students don’t have to resort to hurling water balloons at Greek girls.

You know the drill.  A girl swept up in the joy and revelry of a party meets a guy and hormones drive them into a frenzied night of lust before they pass out together in the guy’s bed a couple doors down from the party.  In the morning, the girl awakens and has to walk home.  Her makeup is all screwy and she’s still in the fancy party duds from the night before.  She knows exactly that everyone she passes is thinking “Look at the whore!”  Being a trooper, she gets over it in time to do it all over again the next night.

Now that girls are allowing unfettered access in the restroom at Kilroy’s Sports Bar, maybe shame is an outmoded term.  I was at a party a couple of years ago where a guy and girl were engaged in some entertaining physical intimacy in a room with the light on and curtains open.  After the whole ordeal ended when the sister of the male participant put a loud and abrupt stop to the fun, I assumed the girl would need a little empathy, so I asked Julie to talk to her.  She and Julie sat down, and Julie asked the girl if she was okay.  The girl looked at Julie like she was nuts and asked, “About what?”  Maybe shame isn’t the word today.  Maybe it’s ambivalence.