“I have no intention of firing Lou Piniella.  Lou and I have a great relationship. Lou has done a lot of good things here. We’re just going through a tough snag. It’s the middle of June. I still feel comfortable we’re capable of getting back in it.

“We’ve never talked about his future after this year. It never has been discussed and I don’t think he or I feel like we’re going to be doing that anyway. He’s fine with me. The guy has done a lot of great things in this game for a long time.”

What are the Cubs – a private club?  The job as manager goes to a guy regardless of the level of play on display night after night as some kind of honorarium for past efforts?  Jim Hendry has been living in hope and dying in desperation for years.  Even when the Cubs made the playoffs, it was clear to anyone paying attention that the team was not capable of winning a playoff series.  The Cubs play caveman baseball – “me grab club, hit ball hard, run around bases.”

When Alfonso Soriano laid down a sacrifice bunt least night, my son called from Chicago, “Did you 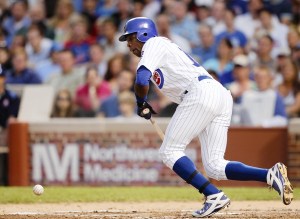 see that!” Ryan was stunned.  The last time Soriano moved runners with a sac bunt, my son was preparing for the July open period basketball tournaments as he was about to become a senior in high school.  He’ll graduate from Loyola in 11 months with degrees in finance and sports management, so it’s been a while.  The crowd at Wrigley gave Soriano a huge ovation.  Cubs fans are so starved for good fundamental and selfless baseball, they applaud successful bunts with the same enthusiasm as home runs.

Hendry is a clown who has spent more than anyone else in the National League to gather some nice parts that absolutely don’t fit together, and hired a manager after the disastrous 2006 season that is utterly incapable of stirring this mix of players into a serum that can play consistently well together.

Piniella is more than happy to sit and watch the game and hope that the hitters hit and pitchers pitch.  Clearly, that is not effective with these guys.  From opening day, which was a complete disaster, this group of Cubs have looked like 25 men with 25 different agendas.  They are anything but a team, and the culture Piniella has enforced has done nothing to change that.

Many thought Milton Bradley was the cancer on the Cubs roster last year.  That obviously wasn’t the case.  Bradley did nothing to help, but the chemistry on the Cubs is no better this year than last.  There was nothing special in the 2007 and 2008 postseason teams either.

Chemistry is elusive, and no manager is brilliant enough to get a room filled with millionaires to coalesce every time, but Piniella seems to be completely removed from the players.  And worse, he appears not to be engaged in the game. When the team with the highest payroll is one of the worst teams in the league, someone is responsible for that lack of performance.  It’s either the manager or the GM.  When the GM stands firmly behind his manager, it’s likely both who should be subject to the consequences reserved for failure this profound.

Both Piniella and Hendry keep saying things like, “This is just a rough patch,” “We just need to get the bats going,” and yesterday’s ”I’d like to think these guys know the spot we’re in, that they know the GM or the manager can’t pull them out of it. They need to pull themselves out of it, too.  We’re there to be supportive, but the players win games — not the GM, not Lou,” said the buck passing Hendry. There to “be supportive”?  No, the fans play the highest average ticket amount in baseball to be supportive.  Piniella and Hendry are there to build, mold, and strategize.  They are there to lead.  What kind of crazy shit to say is “We’re there to be supportive.”  Jesus Christ.

Tom Severino was a great boss, and he used to say, “Fix the problem.  If you can’t fix it, then you become the problem.  If I can’t fix you and am unwilling to replace you, then I become the problem.”  Great lesson.  At the time, it got my full attention because of the context of the lesson.  I assimilated and corrected the issue I was had because the clear implication was that I would be fired if I didn’t get it done.  We didn’t need to have that talk again.

I don’t believe anyone is holding either of these boobs accountable for anything.  Hendry obviously holds Piniella in very high esteem, and doesn’t want to damage the relationship they have built.  The owner/biggest fan knows that he doesn’t know a damn thing about baseball compared to Hendry, so he is intimidated by the egomaniacal blowhard.  Hopefully, that passes – soon.

It’s not that Hendry is pitiful.  He has done some very good things including hiring Tim Wilken to run the scouting department and Oneri Fleita to run the minor league program.  Wilken’s work is beginning to pay off, and should allow the Cubs to lose the eight-figure contracts of Aramis Ramirez, Kosuke Fukudome and Ted Lilly without compromising the productivity.  That’s a positive. The complete void of leadership is the negative, and it will be addressed before the Cubs achieve the level of success $145-million deserves.

Unfortunately, it appears that no one in Wrigley Field is willing to make the tough calls necessary to get it right.