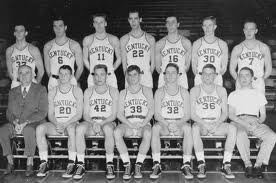 The Kentucky basketball program was led for 41 years by a man they still call “The Baron”.  Adolph Rupp led Kentucky to a then record 876 wins despite only six of those seasons being comprised of more than 30 total games.

Here are some quotes attributed to Rupp.  Some mean-spirited, yet funny; some are racist; others are just nutty.  Read his words as remembered by colleagues, journalists, and players.

#4 – The entire canon of Rupp’s commentary is the fourth greatest moment in of disgrace in the history of Kentucky basketball.

To Ernest Sparkman during the 1944 NIT: “Sparkman, you see that center circle? I want you to go out there and shit. Then you can go back to Carr Creek and tell them at least you did something in Madison Square Garden.”

“Harry, that son of a bitch is ordering me to get some niggers in here. What am I going to do ? He’s the boss.”  Harry Lancaster, long-time assistant to Rupp, in his book.

“Once, I was on a flight with Rupp and sat with him in the first-class section. He had about six Kentucky bourbons in less than an hour and was about halfway to the wind. I told him that I was an attorney who represented some basketball players. Now, I had never met the man, and the first significant thing he said to me was, ‘The trouble with the ABA is that there are too many nigger boys in it now.’  I sat there just stunned. That just killed my image of Adolph Rupp the great coach. Maybe it was because he had too much to drink, but even so…” – Loose Balls by Terry Pluto, Simon & Schuster, 1990, pg. 241.

While in New York a writer ask Rupp if he could suggest any changes to the game and he answered, “Sure, put the center jump back, take the backboard and net off-just leave the hoop on-and raise the hoop five feet.” Later a Kentucky player asked him, “Coach, you don’t really mean that do you?” Rupp replied, “Hell no, but anything for a column.”

During 1944, UK led Arkansas State 34-4 at half time. The players felt good in the locker room and were sure Rupp couldn’t find anything to complain about. After looking at the scorebook, Rupp said, Who’s guarding #12?” Jack Parkinson said, “I am.” Rupp answered, “Well get on him because he’s running absolutely wild.” Arkansas State scored two points in the second half.

“He said, ‘You’ve got to beat those coons,’ He turned to (center)Thad Jaracz. ‘You go after that big coon.’ . . . He talked that way all the time. . . A chill went through me. I was standing in the back of the room, and I looked around at the players. They all kind of ducked their heads. They were embarrassed. This was clearly the type of thing that went over the line.”   Frank Deford, Sports Illustrated, reporting on Coach Adolph Rupp’s halftime exhortations in the UK Wildcat’s locker room.

To John Crigler: “John, a 150 years from now there will be no university, no fieldhouse. There will have been an atomic war and it will all be destroyed. Underneath the rubble will be a monument, on which is the inscription, Here lies John Crigler, the most stupid basketball player ever at Kentucky. Killed by Adolph Rupp.”

As with Calipari, not all is bad about Rupp.  He did recruit one black player who stayed in Lexington for one year, and then left for the pros.  His final team was all white.

Rupp coached at Freeport (IL) High School in the late 1920s prior to taking the Kentucky job, and coached a black student there.

In reading multiple books books and articles about Rupp, it seems he was one of those misguided souls who had a lot of reason to hate and be hated than simple racism, but it does not excuse his behavior or words.

To call Rupp a racist does a gross injustice to his other flaws, as well as traits of a leader who used shocking tools to coerce, intimidate, and cajole his players.

The #3 greatest moment in UK history will be yours to peruse Tomorrow morning.

One thought on “Great Moments in Kentucky Basketball History – #4”