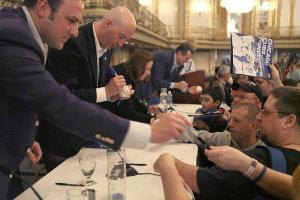 The Ricketts sign autographs for disappointed fans who stood in line without being sure who the hell any of them are.

The best thing an owner in pro sports can do is hold  a general manager accountable to a level of on-court or on-field play that wins championships.  At worst, he becomes an apologist for the inculcated and institution mediocrity that comes to define a losing team.

The Chicago Cubs have lost in the end every season since 1908.  Here is a very partial list of historical events that have taken place since the Cubs were last champions:

You get the idea.  It’s been a long time – a really long time since the Cubs won a World Series, and every person born when the Cubs last played in a World Series is now eligible for Social Security and Medicaid.  Long time.

Changing a culture that has made losing its calling card through 18 U.S. Presidents, (I’m not counting Teddy Roosevelt, even though he left office after the Cubs won in 1908 as his term ended before the opener of the season that began the current 102 season skein), is not done by embracing the status quo – particularly one that has endured a nine-game postseason losing streak, and entered into so many foolishly long and large contracts that well over half the team’s payroll is being squandered on inconsistent – at best – players.

Kosuke Fukudome, Aramis Ramirez, Carlos Silva, Carlos Zambrano, and Alfonso Soriano will be paid nearly $75 million this year, and that doesn’t count the $10-million going to Carlos Pena, who hit .196 last year for the Tampa Rays.

Yesterday, Ricketts signed autographs along with his family for awhile at the Cubs Convention along with his family, which begs the question, who the hell wants the autographs of anonymous Ricketts family members?  “Ooooh, I got the sister!”  Then, he took some questions.  One was from a fan who Ricketts ought to hire because at least the question made sense, and asking good questions is the first step toward quality management.

The question was, ‘‘How does Jim Hendry still have a job?’’  The answer was baffling.

“Over the past year, I’ve had growing confidence in Jim, to be honest.  He has a good team of people he’s put together. I’m not going to hold [the postseason failures] against him. What I am going to judge him by is how many players we’re consistently bringing up to the major leagues, and are the dollars we’re spending on the big-league team being spent well?  I think Jim’s doing a good job. I think we’re starting to see some of the fruits of his labor,” Ricketts said.

Okay, now Cubs fans know what they are dealing with.  Mark Twain, who died a year and a half after the last Cubs World Series triumph, is famously quoted as saying, “Better to keep your mouth closed and be thought a fool than to open it and remove all doubt.”  A less clever and more direct quote about Ricketts attributable to me is, “What a boob!”

As for the second criteria Ricketts cites, “are the dollars we’re spending on the big-league team being spent well?”, only one team in the history of baseball has spent more and won less – the woefully mismanaged 2009 New York Mets won won only 70 games while spending $149-million.  The GM of that Mets team, Omar Minaya, is now sleeping in and collecting unemployment.

To spend as Hendry did last year, keep players physically if not mentally healthy, and lose 75 games is historic underachievement in getting bang for the buck.  As for the assertion that the farm system is producing, it is – due to the work of scouting director Tim Wilken, whom Hendry was smart enough to hire.

Ironically, two of the best prospects for which Wilken is responsible were traded to the Rays for #3 starter Matt Garza.  Even in Chicago, Wilken’s efforts continue to pay dividends for the Rays.

There is no reasonable metric that can be used to judge Hendry a success.  His free agent signings have been mostly failures.  He gets an A for adding Marlon Byrd last offseason, and Greg Maddux before the 2004 season.  The rest, a lot of Ds and Fs with Soriano and Fukudome leading that list.

The only measurement for the success of a general manager is wins and losses, and Hendry has not built a culture of excellence that has led to anything resembling that.  Ricketts should demand better rather than seeking out microphones and baseballs to sign at the Cubs Convention, and hands to shake in the bleachers.

He should do his job and hold people accountable for their failures, and that starts with Hendry.  How many more years of mediocrity do Cubs fans have to endure before someone gets serious around Wrigley Field and demands more than an expensive picnic be provided to fans.

If Ricketts isn’t serious about getting it right, he should sell, and give daddy back his money.