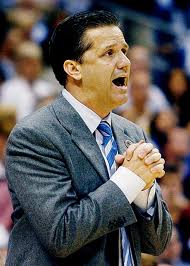 "Forgive me Father, for I have sinned."

John Calipari is not a guy I have a lot of good things to say about, but when he called a Kentucky player a “selfish motherfucker”, I didn’t care.

This doesn’t make Calipari a bad guy, any more than his language made Bob Knight a bad guy.

The moral outrage being expressed by people whose sensibilities have been hurt by Calipari’s use of language is idiotic.  Words have power, no doubt, but to allow their use to bother us is ridiculous.

The American profanity allergy shows us to be sensitive types eager to be prompted to moral outrage, and it needs to stop.  Limits on use of language doesn’t make us pious or holy.  It doesn’t make us hip or cool either.

Coaches have been using language like this since the beginning of time.  In James Naismith’s rules of basketball, the fifth rule is “No fucking dribbling, you assholes!”  Only the use of white out by Naismith’s heirs have made their presentation acceptable outside a bar.

I have heard stories from coaches who told me the things they said to players in front of their families, and it curled my ear hair.  I sat behind the Indiana bench at a game in 1991 or 1992, and the language Bob Knight directed toward Todd Jadlow made me feel terrible for the kid and his parents if they were nearby.  He yelled it loudly enough that his verbal cannon shots at Jadlow could be heard 20 rows up.

Had I been Jadlow’s father, I would have left my seat and challenged Knight, and then I would have been in my kid’s grill for allowing any man to say that to him.

The sad truth is that some kids occasionally need to have their hard drives rebooted, and some shockingly profane language sometimes gets that done.  To be critical of Calipari would make me a hypocrite, as I dropped an F-bomb as a substitute teacher to get the attention of a classroom full of eighth graders.

The best use of language prompts the desired response.  That’s the whole idea behind the effort of talking.

The ultimate arbiter of right and wrong in this case is Terrence Jones, the freshman who was embarrassed in front of the country.  Jones tweeted, “If ur saying ur parents never said anything to you that hurt ur feelings and then apologized to you after ur lying. I’m happy and blessed for playing for Cal. Don’t think otherwise.”

For me, that’s case closed.  Had Jones taken offense and come back at Calipari, he would have been perfectly justified.

Calipari might be a self-serving guy who has discovered the perfect level of reward needed to acquire the very best recruits year after year, but he did nothing wrong here.

4 thoughts on “John Calipari Tirade – Can We Get Over Ourselves?”