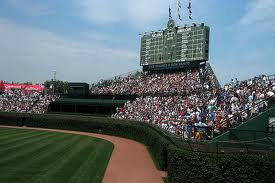 Constantly charting the plight of Cubs fans by listing the disappointing moments gets a little monotonous, so how about some positive memories.

Some of these are a little obscure because they are my favorite memories, and they deal more in moments than overall success because, well, overall success predates the President William Howard Taft getting stuck in a White House bathtub.

These are by no means the greatest moments in Cubs history, but my greatest Cubs memories.  Not in the mix is the Ryne Sandberg game in 1984 because it wasn’t telecast where I lived.

But here they are – my favorite five moments as a Cubs fan:

#4 – Sunday, August 20, 1978 – Dave Rader was an obscure Cubs player in 1978, and in mid-August the Cubs were 62-59, just three games out of first place and looking for a hero.  The Reds led 1-0 going into the bottom of the ninth, and I was stuck at the Kentucky State Fair wandering around in a pavilion but found a TV.

Louisville was filled with Reds fans, and one of the exhibitors was smart enough to draw a crowd by putting on the Cubs vs. Reds game.  This was before the mass proliferation of cable, so it was tough to catch a Cubs game, and I stood there watching the Cubs first two hitters in the ninth  make outs.

When Bobby Murcer and Bill Buckner make the first two outs, leaving the Cubs with Larry Biittner as their last hope, both Cubs and Reds fans leave both assume the game is over, and that was certainly the case at the Fair.  A friend – Chris Pruitt –  and I were the only people left when Biittner singled to left.  Then Manny Trillo singled, and hope was flush.  Sparky Anderson replaced Mike LaCoss with Doug Bair, and Ivan de Jesus walked to fill the bases.

That left light hitting Dave Radar as the guy to either thrill or crush the full house at Wrigley, and he delivered a shot over the head of right fielder Ken Griffey that drove in both Biittner and Trillo for the 2-1 win.  When my love for the Cubs as a kid and the endless tedium of the Kentucky State Fair are considered, it’s not surprising this is my favorite Fair memory too.

On this day though, the Cubs delivered the most exciting win I’ve ever seen at Wrigley.  How can you go wrong in a game that features Paul Reuschel, Lou Brock, George Mitterwald, Tarzan Joe Wallis, and Rick Reuschel as a pinch runner?   The skies to the west looked like the end of the world was coming in minutes as the Cubs entered the bottom of the eighth behind 5-4.  The Cubs load the bases with one out on two walks and a basehit to right by Bill Buckner.

Clay Carroll relieved Rawly Eastwick to face pinch hitter Manny Trillo, and promptly balks home the tying run.  Trillo then grounds to second and Mike Tyson (the ballplayer not the boxer) decides to throw home.  Gene Clines slides in safely as the throw gets away from catcher.  Reuschel lumbers around third and scores before the ball is retrieved.  The crowd went batshit crazy, and friend Nick Anson and I led the cheers.

Nick and I were kids back then, and our parents didn’t hesitate letting us hop on the train from Lake Bluff to Davis Street, hop on the Howard, and buy tickets ourselves at Wrigley.  Those days are over for most kids, which is too bad because we had a hell of a good time.

#2 – Tuesday, April 16, 1968 – My first Cubs game at Wrigley with my Dad.  I was in kindergarten, and Dad started a great tradition that day.  He would take me out of school without warning to go to a Cubs game.  Everyday during the spring from kindergarten through eighth grade, I hoped that that was the day.  On this first trip to Wrigley, we sat in the eighth row behind the Reds dugout.

Getting good tickets for Cubs games wasn’t too tough back then on a weekday.  I had only seen Cubs games on black and white TV, so when we walked up the steps from the concourse to the box seats ($3.50 each then), the green of the field and scoreboard was overwhelming.  I had never seen anything quite that beautiful.  As we sat, there were two Reds standing at the brick wall signing autographs.  Dad pointed to one, and handed me the scorecard and pencil, “Have that Reds player sign this.  I walked down, waited, got it signed and came back.  Dad was laughing, and I asked who that Red was.  He said, “That is Fred Whitfield, Kent.  Pete Rose is the guy standing next to him signing autographs.”

There began a lifelong series of miscommunications that defined our relationship.  Another Dad habit showed itself that day.  He never saw the eighth or ninth inning of a Cubs game because he wanted to beat the traffic.  That worked for us on this day as the Cubs lost 9-8 on a Lee May single in the ninth.  Ernie Banks hit a home run that day, and when we left after six innings, the Cubs led 8-6.

#1 – Sunday, September 24, 1989 – This was the final Cubs home game during a season they won the NL East.  They had a four game lead when the day started with seven left, so even the most cynical Cubs fan thought this last home game was a coronation, so Paulie Balst and I made the half-mile walk from our apartment to see if we could get a couple of tickets cheap.  We ponied up $35 to a scalper for two bleacher seats, and wedged ourselves into the second row in right field above the 368 foot sign much to the dismay of the people who showed up two hours earlier to sit there.

The Cubs delivered with a fairly routine 4-2 win.  It was also Harry Caray Day, and every fan received a rolled up poster of Harry as a premium as they walked into the park.

After the game, as the Cubs retreated into the clubhouse, no one in the stands left.  They stood waving their posters and cheering wildly.  The noise never quieted, and no one moved toward the exits.  I’m not sure whether the fans were trying to get the Cubs to come out of the clubhouse, or whether they just wanted to enjoy the moment together, and didn’t want it to end.

About 15 minutes into the bedlam, Vance Law walked out of the dugout with another guy, and the crowd came unglued.  Law looked around like there was something wrong with the fans, talked to his friend for a minute, and then ducked back inside.  Another minute later, the rest of the Cubs charged out the clubhouse door, and the place came totally unhinged.  The players circled the field, and I wept.

There aren’t many sporting events so perfect they bring tears, but I stood there with tears streaming down my face as though some dam of emotional pressure had been released.  The players were in all state of undress, none still in their uniforms, and the smiles on their faces were like goofy eight-year-olds on Christmas morning.

Being a Cubs fan seem foolish far more often than not, but for those beautiful, joyous moments shared with friends, it’s a decision I would gladly make again.  Although, as most Cubs fans would tell you, we never had a choice.