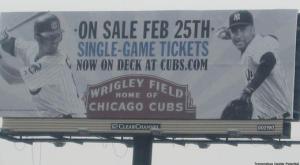 The Chicago Cubs have Derek Jeter alongside Starlin Castro on billboards all over Chicago extolling fans to buy mini-season ticket packages.  How pathetic.

The Yankees will be at Wrigley for a three game set from June 17 – June 19, but if a ducat to one of those three games is the best reason Ricketts & Company could come up with for prompting calls to the ticket office, that makes it hard to quantify the depths to which the Cubs brand has sunk in the eyes of its own marketing department.

GM Jim Hendry has invested so much money on such a wide ranging collection of athletes, fans might expect to see one of them on the billboard instead of a future Hall of Fame shortstop who plays for the New York Yankees.

Third baseman Aramis Ramirez, reserve outfielder Kosuke “Mr. April” Fukudome, Alfonso Soriano, and the three Carloses (Zambrano/Silva/Pena all will make between $10-$19-million in 2011 for playing baseball on Chicago’s north side in 2011, but none were deemed worthy of joining Starlin Castro on the billboard.

That says as much about the 2011 Cubs as their record will.  There is even a little reason for a ray of hope heading into this season.  While the Cubs are mostly a group of overpaid relics trying desperately to hang on to whatever small shadow of their  former talents, the National League Central got a whole lot more winnable for everyone but the Pirates when St. Louis Cardinals starter Adam Wainwright suffered a season-ending elbow injury.  There are a dozen significant ifs surround the Cubs this season, but when 86-76 might win the division, the answers don’t need to be career years from a dinosaur like Aramis Ramirez.

And yet, with the optimism Mike Quade is bringing to the team, Derek Jeter is the guy on the billboard.

Hendry felt so strongly about his starting eight that he added only one piece.  The Cubs were shutout 15 times, and scored a paltry 685 runs – more than 100 less than division rival Cincinnati – and the only help is in the form of .196 hitter Carlos Pena.  The pitching staff is bolstered by 15-game winner Matt Garza and oft-injured set-up man Kerry Wood.  Now the billboard is starting to make a little sense.

If the Cubs want to sell tickets, instead of having Tom Ricketts walk around Wrigley Field like the Pope of Wrigleyville, perch Hendry above a piranha infested dunk tank.  Alright, that’s a little severe.  Maybe the chance to yell at Hendry for 30-seconds.  Line up season ticket holders, and let them unload the venom that has built over the nine years that Hendry has delivered a thoroughly unsatisfactory result.

At least the Cubs were honest in telling fans they really have nothing to look forward to this year but the development of the soon to be 21 year old Castro and a visit from Jeter and his Yankees.

Cubs single game tickets go on sale today, and I used to look forward to this day like a junior Christmas, but if I want to watch creaky old bastards pretend they are elite athletes, I might as well go to a softball diamond as play myself.

If I want to see Jeter play, I’ll do it in Yankee Stadium where the ownership and management doesn’t insult my intelligence.