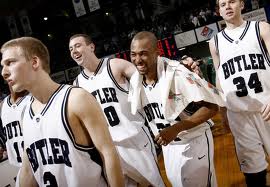 It started with a visit from Zach Hahn’s Mom Connie.  She asked me if I was emotional about the day.  Inside, I thought, why would I?  It’s Butler’s Senior Day, not Loyola’s.

Hahn played his last game at venerable Hinkle Fieldhouse, (if you don’t precede Hinkle Fieldhouse with the word “venerable”, athletic director Barry Collier will sue you), as did Matt Howard, Shawn Vanzant, Grant Leiendecker and Alex Anglin.  Their families were rightly filled with pride as the work their sons have done for Butler University and its basketball program was honored.  I couldn’t figure out why Connie would think I would be emotional, so I pondered the question a little too thoroughly.

In ten seconds, I came up with a reasonably long list:

Prompted by some internal investigation that Connie encouraged with her question, I unraveled into a fragile mess.  When the National Anthem played and a few of his teammates shuffled their feet with their hands on their hips as if the playing of America’s song was an inconvenience, Ryan stood tall with his eyes on the flag, and his hand over his heart just as my grandmother had taught me to do, I had to do the same thing to keep from melting.

Despite sitting in the visitor’s section behind the Loyola bench, my wife Julie and I stood and applauded for Matt, Zach, and their teammates because those two kids are good family friends, and because Butler goes about building young men who happen to play basketball, rather than fielding a team of basketball players who also go to an occasional class.

Throughout the game, Julie and I watched the score to see if the margin in either direction would allow Ryan to get into the game.  He hasn’t played much this season, and getting to see him play even a few seconds in his last regular season game that happened to be scheduled in his hometown in front of so many friends would be a nice final moment of fun for this young man who still loves the game as much as he did as a nine-year old spending summers on the same court in front of many of the same people.

The game was played with a single digit margin throughout the second half, and it looked like Ryan would stay planted on the bench.  We resigned ourselves to being satisfied with a postgame hug before he hopped on the bus back to Chicago.

But with 14.4 seconds left, coach Jim Whitesell called Ryan’s name, and in he went.  Normally, playing less than a quarter of a minute is more an insult than a gift, but not this time.  Shawn Vanzant was at the foul line, so unless he missed and Butler got the offensive board, Loyola would get the ball, and that meant he might get a last shot to knock down a three in front of a bunch of people who would have no idea why small sections of people cheered the meaningless shot.

Vanzant made the shot, and power forward Andy Polka called an offense that would allow Ryan to get a shot, and he told Ryan, “You better shoot it.”  No one has ever needed to tell Ryan to shoot, and when he brought the ball up the floor, I thought he was as likely to fire it from 40-feet as anything else.  He gave the ball twice to Polka because he knew Polka was committed to getting him a shot.  Butler, up ten points with under ten-seconds left, defended as you might guess they would – with wild tenacity that was not dictated by the score.  Ryan caught the final pass from Polka, and with his friend Matt lunging at him as though the shot meant something, let it go from 25.

Clearly, the shot was long.  My heart sank as though the result meant something, and then something miraculous happened.  The ball caromed off the glass, hit the front of the rim, hit the glass again, and then dropped through the net.

For the 10,000 people at Hinkle, the shot appeared like a lucky shot that turned a ten-point lead into a seven-point win.  The rest of the afternoon belonged to the Butler seniors who deserved every bit of adoration the crowd showered upon them, but that moment where the ball clanked and clattered against the glass and metal belonged to Ryan Sterling, and it let him know that his years of work were not in vain – that someone up there wanted him to have one more moment – a moment of grace for a kid who doesn’t know how not to love basketball.

Here’s the video of the shot: