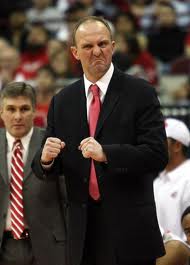 Knight is still an icon in Indiana, and much of the discontent with Crean’s performance as the third replacement for the red-sweatered volcano is not just about Crean’s three Hoosier teams combining to win eight total Big Ten games, but about Crean not being Knight.

Matta knows that, and might have been a little resentful of Crean calling him out for his halftime conference with the three officials working the game, or maybe Matta wants to continue to reinforce the image in the heads of Indiana high school recruits that Ohio State wins championships with Indiana kids while IU struggles to rebuild.  Maybe it was something else, but Matta’s charming anecdote was driven by a motivation more nefarious than a quaint little story about an old coach helping his alma mater.

According to Matta, “I reached out to the master.  He gave me this defensive drill,” Matta said. “Our players hate it, but I think it made us play a lot better.”

“I’ve helped facilitate a few things for him, and he’s (reciprocated). But he’s like, ‘Don’t you tell anybody that I’m doing this,'” Matta said.

“He wants us to do well. It’s unbelievable. I love talking to him because, No.1, you get so much basketball-wise. And then you get a lesson in history. And then you laugh your ass off because he’s one of the funniest human beings I’ve ever talked to.”

Point guard Aaron Craft later revealed that it was the simple drill of having four defend five – hardly an amazing new device that Knight might have bestowed upon Matta.

So there it is.  Knight is helping Ohio State beat Indiana.  And Matta would like everyone in Indiana to know that.  He and Knight are buddies, while Crean can’t get him on the phone, and athletic director Fred Glass can’t get Knight to come back – even to accept his place in the Indiana Athletics Hall of Fame.

As if putting former Indiana high school standout, freshman Deshawn Thomas, in a position to score nine more points (22) than he tallied over the past seven games combined wasn’t enough, Matta had to invoke the name of the coach many Indiana fans will always pine for, and the man whose refusal to let bygones be bygones fuels the rage of many basketball fans in Indiana.

No doubt, Matta believes himself to be a clever man – a strategist of the first order, and a man not to be trifled with.  He’s actually the coach of the best team in the country, and a guy who doesn’t need to concern himself with silliness like this.  Ohio State has a chance to win the Big Ten regular season title, the Big Ten Tournament, and the take a trip to Houston for the Final Four.

If I’m Tom Crean, I’m thrilled that Matta is so threatened by the work being done to build the next four recruiting classes that he needs to showcase Thomas, and then play the Knight card as though those two are great friends.

This isn’t the first time these two coaches have engaged in back-channel squabbles.  Matta has engaged in some very negative recruiting against Indiana, and Crean has called him out – although not by name.

A 3-13 Big Ten team is rarely treated with this kind of smiling rancor by a team that has a chance to win a national championship, and that should be all the confirmation Crean or those who closely follow IU hoops should need that Indiana is on the way back.

The proof will be in the pudding as the next four classes of recruits report to Cook Hall, but Matta’s gamesmanship is a signal that Crean is on the right track.