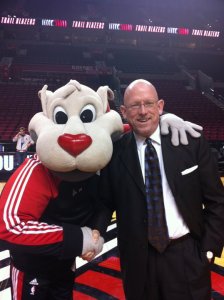 Great play-by-play guys don’t come around very often, and more often than not, they tend to bounce from gig to gig, always searching for the next rung on the ladder – to where I don’t know.  Mark Boyle has been in Indianapolis calling NBA basketball games for the Pacers for 23 seasons, and frankly he’s the best there is at it.

Mark’s voice has been the defining and continuing characteristic through the good times and bad for the Pacers.  What Jack Buck was to St. Louis, Mark is to Indianapolis.  He never blows a big call.  As signature franchise moments are paired with the video of the moment as it happened, Mark’s emotion and articulation of the magic are as big a part of the memory as the play itself.

Whether the Pacers win or lose, Mark does his job with consistent passion and skill.  So at 2,000 games, does Mark have any interest in calling another 2,000?

Congratulations to a unique professional and man who significantly raises the level of the mean for professional play-by-play broadcasters.  The Pacers are damn lucky to have him.  He is the touchstone between the Pacers and almost every fan, but has never allowed popularity to define his work.  He earns his money with routinely excellent broadcasts.