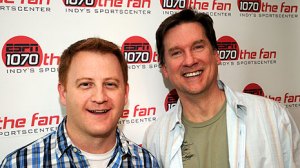 Fox-59’s Chris Hagan and I went into Emmis today a day in advance of the debut of our show to go over what will do, how we’ll do it, get some pictures taken for the website, and promote the show with Dan Dakich.

I spent most of the time talking to Dakich sounding like some kind of idiot – laughing regardless of the situation, and mostly trying to justify Dan’s assessment of my ability to entertain, which I felt was unjustly positive.

Back in the day, I used to tell hosts to be themselves.  The right frame of mind is to be who you are, but at a slight more agitated state.  Trying to be someone else is usually a disaster.

That’s why the people who are very comfortable in their own skin, wel–informed, and entertaining are the best radio talent.

Performing TV news, weather, and sports is a little bit different.  It’s about the what.  Talk radio is about the who.  Lorne Michaels also says about Saturday Night Life that the comdedy is important, but whether they like the performers keeps people through a commercial break.

Radio is the same way.  People might have been initially attracted to Dakich’s show because of what he knows, but they stay because they like him.

Hagan is a likable guy.  He’s funny, self-deprecating, and an all-around good egg.  I, on the other hand, can be quick to judge, sarcastic, and occasionally say things in ways that stick.  I’m a little impatient and quick to anger.  All that makes me a little nervous.

Some people like me and some don’t, and I’m being kind.  I suppose I have that in common with Dakich.  There are those who listen to Dan wrong and they find him abrasive.  That’s part of his charm.  After all, what good is being liked by people if everyone likes everyone.  I’m arguing against myself here.

It’s two-hours of radio.  We are well-prepared with two solid guests – Butler’s athletic director Barry Collier will talk about how Butler got to their second straight Final Four and Indiana guard Jordan Hulls will tell us about how IU can get over the hump to take the next step toward getting to where Butler is.

We’ll also tell you who will win tomorrow night, whether the Pacers will make the Playoffs, and whether Matt Painter made the right move by staying at Purdue.

Even I couldn’t screw that up.

You can catch the show in Indiana on 1070 AM, and online at 1070thefan.com.  The Fan also has an app for your iPhone.

One thought on “New Show Starts Tomorrow, and I’m Nervous”