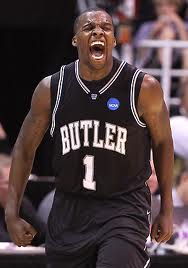 With Shelvin Mack leaving for the NBA, the best team in Horizon League history just lost its best remaining player, but it still remains a special program, and that is going to have to be enough for fans.

What they were able to experience the last two seasons was a moment of grace that stretched into an unprecedented two year run in shangri-la at the corner of inspiration and perspiration is gone likely not to return.

“The Butler Way” will help the players remaining from the outstanding teams that made it to the NCAA Championship game in two consecutive years represent the Bulldogs will dignity and class, but without Matt Howard, Shelvin Mack, Shawn Vanzant, and Zach Hahn, the talent needed to compete with the best the Big East, Big Ten, and ACC will be elsewhere, replaced by very good Horizon League talent like Ronald Nored, Andrew Smith, and Khyle Marshall.

The difference between very good and special lies in talent, and Horizon League programs don’t get kids like Howard, Mack, and Gordon Hayward very often.  To get three at once is fortuitous, and for all three to be selfless enough to help build a culture of extreme work ethic, camaraderie, and cooperation is rare enough that they accomplished what no like team ever has.

Butler Basketball is the blueprint for success for all college teams – not just those for a small conference.  Daily 6:00 a.m. workouts, tireless and shrewd recruiting, and genuine wholesome goodness has given Butler fans the moral high ground that used to belong to Indiana in these parts.  They do it right, and they succeed beyond what anyone else has.

It’s good that other coaches who compromise have to watch Brad Stevens walk into gyms throughout the summer recruiting tour and silently curse him because he’s been able to succeed without cheating, opulent resources, and the constant compromises that sully many of their reputations.

John Calipari has been to one NCAA Championship game in his career – although you won’t find it in the official record book.  He is the poster boy for the slick hustlers who find a way around or through the rules to build a winning team.  Stevens has been there twice in 13 months. and if he unknowingly made one impermissible phone call, he would throw himself in the White River and scrub himself raw with pumice to cleanse his soul.

But the talent needed to continue that incredible run is gone.  It won’t make the accomplishments of future Butler teams any less special, but the two championship game banners are likely going to have to keep themselves company for awhile.

The most meaningful competition for a team is always to reach its potential, and that’s what Butler focuses on each year.  The measure of that battle is made during games against teams trying to do the same.  Butler has gotten the most out of its players for a long time, and they will continue to.

The Bulldogs won’t lack leadership with Ronald Nored asserting himself to make sure the other Bulldogs play and practice with clear eyes and full hearts, and they will get close to that elusive quarry of potential again.  Without those who have gone from the program, that ceiling likely isn’t high enough for a threepeat, but that’s just fine.

Playing hard, winning more often than not, and doing it the right way should be plenty for a fan base that is growing bit by bit.

Stevens has proven himself not to be a money-hungry opportunist, as he has rebuffed countless inquiries and offers from other big-name programs who would love to land the coach who has shown that educators, not businessmen, still make the best coaches.

He’s a rare breed, and Butler isn’t just lucky to have him.  It’s very culture helped create him.  What was he doing this weekend to celebrate his unprecedented and enormous success?  Stevens hosted a basketball event for adults that raised money to fight cancer.

Mack is going to the NBA, and that reduces the talent available to try to win five NCAA Tournament games for the third straight year, but it doesn’t change who Butler is or how it does what it does.  That should be enough to bring fans back to Hinkle year after year.

During a year when selfishness and financial greed is clearly the driving force behind professional sports, investing in Butler tickets appears to be the best move for those with some discretionary cash who want a simple and fun night out.  The NFL is locking out its players.  The NBA will do the same in less than two months.  Butler players show up for work before dawn for no pay, and are thrilled for the opportunity.

Who’s to say they can’t make it back to a third Final Four – other than prognosticators like me who look at a Venn Diagram to see how unlikely it is.  The odds against a second trip were staggering, and Butler overcame those.

But regardless of next year’s result, knowing that coaches in the Calipari mold have to look with envy at what Stevens has accomplished at the age of 34 with a Horizon League team who competes the right way is plenty enough reward.

Butler fans, be thankful for you have, and comfortable knowing that while you sleep, the Bulldogs are working hard at Hinkle Fieldhouse to explore their potential.  While you work, know they are in the classroom participating in college like ordinary students.

It doesn’t happen everywhere.  In fact, I’m not sure it happens anywhere else.

5 thoughts on “Butler Basketball – Shelvin Mack Leaves for the NBA, and Era of Greatness Likely Goes With Him”