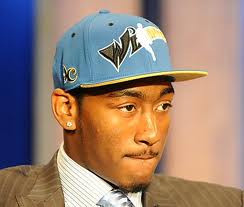 Unlike John Wall, who knew where he was going, many underclassmen in the NBA Draft have no idea, and that knowledge needed to guess will be much scarcer next year.

Next year, the NCAA will force college players to decide whether they will forgo their remaining eligibility to enter the NBA Draft by the middle of April, and that will make it very difficult for a kid and his family to make the right choice.

Not everyone deciding to leave college for the NBA is John Wall, guaranteed on being selected in the top five of the draft.  Wall, who was selected first overall last year, knew he would make millions by leaving Kentucky, but there are others who dream of playing in the NBA, like Butler’s Shelvin Mack, who are projected to go in the latter portion of the first round or in the second.

The difference is enormous.  In the current collective bargaining agreement, the salary structure of first round picks guarantees them three years of cash.  Second rounders can be cut without receiving a dime.  The difference between being picked 30th (the last pick in the first round), and 31st (the first pick in the second) is huge.  #30 is set for life, if he invests well.  #31 could be out in the street three months after being picked.

With stakes that high, don’t the schools, coaches, and NCAA owe these kids, who are paid nothing to generate millions in revenue that funds all non-revenue sports as well as the bloated salaries in the big time athletic departments that purport to care for these kids, owe them a little more than an all too swift kick in the ass when they decide to make the jump?

It would be nice for the schools to allow the kids to be evaluated thoroughly to give them the best shot at being right in going all in with their future.

Butler coach Brad Stevens wasn’t thrilled about the current process in an interview Saturday with Chris Hagan and me on 1070 – the Fan (Saturdays 9a-11a), and much less pleased with what the timeline will be next year.  He spoke about how it would have been nice for Mack to go through the full regimen of workouts before making his decision.

The deadline this year was yesterday – May 8.  Next year, it will coincide with the first day of the late signing period, which will fall roughly one week after the NCAA Championship game.  Couple that with the mandate that workouts for NBA teams cannot cause a student to miss a class, and the window gets very skinny for players to ascertain their value to NBA teams.

John Calipari, whom I generally loathe as an example of all that is wrong with college basketball, did something smart this year by hosting a combine for his players who were deciding whether to return or jump to the NBA.  I know the reason for doing it had little to do with the welfare of the kids, but serves as a recruiting tool for high school kids who will be lured by the opportunity to have scouts and GMs show up in Lexington during the week between the end of the season and the date the NCAA allows for them to pull out of the draft.

But he did it, and because of that, his players got better feedback, and made a more informed choice.  Not every school has enough kids worthy of NBA evaluation to make the trip worthwhile for NBA franchises to invest the time in a trip to campus.  Despite what might have been a selfish act, the result was a more informed decision for those kids.

The NBA Draft is an imperfect science to begin with, and now that players won’t be able to receive anywhere near the incomplete feedback Mack has been given this year, it’s a crapshoot at best for those unlike Wall who know they will go early.

And why?  So the college coaches can grab up a replacement at the earliest possible moment.  “Thanks, Shelvin.  Appreciate the effort.  Good luck, and goodbye.”  That’s not the way Stevens would like it, but it is the rule the NCAA adopted because the NCAA and college basketball coaches (minus those like Stevens, who actually give a damn) have as much interest in the genuine welfare of the players as owners of the thoroughbreds who ran in Saturday’s Kentucky Derby care about the horses.

There is a lot wrong with college athletics that should require the urgent attention of the NCAA, but upon what do they affix their attention?  The convenience of those coaches who want to win rather than lead.

The NCAA does some things very right.  For schools that don’t generate millions in revenue, the NCAA gets it and serves the kids and schools very well.  For those kids forced to use the indentured servitude of big conference college athletics as a minor league by the draconian and self-serving rules of the NBA, the NCAA is a disaster.

Major rules are broken by the minute, and the only real method for the discovery of those violations are for the schools to self-report, and for the media to fund investigations themselves.  The players’ images are appropriated and sold, and the kids have no choice but to behave as though they are plebes at a military academy.

There is seemingly no one in the room allowed to ask “what’s best for the kids?” when any decision is made.  Entering into an agreement that benefits the kid either by providing money or information is a major violation.  And why is that?

Advocacy for student-athletes is strictly prohibited.

Every time I write about the NCAA is a bastion of idiocy and self-centeredness, I am deluged by emails from those who decry my ignorance and naivete in believing it might ever be otherwise.

My complaints are prayers that one day changes that help kids and not coaches might come.  St. Jude, the patron saint of lost causes, needs to pay NCAA president Mark Emmert a visit.