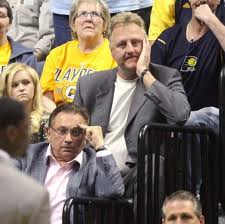 Indiana Pacers president Larry Legend will duke it out today with owner/mall magnate Herb Simon near Los Angeles to chart the course of Indiana’s favorite NBA franchise.  It’s not exactly Ali/Frazier, but this will do.

Simon, who was furious at the performance Larry gave in the season postmortem press conference, will try to get Larry to capitulate to a financial haircut, and some of his ideas for the Pacers next step in rebuilding.

Larry will try to keep as much power (and cash) as he can, while giving in to some demands just so he appears to be a cooperative listener.

Simon wants Bird back, according to sources.  And Bird wants to come back, according to Bird in his press conference.  Bird will refuse to report to the other Pacers president Jim Morris, but will likely offer up general manager David Morway if asked to.

Bird would like to finish what he started, and will finally have the cash to do it (depending upon the new collective bargaining agreement).  Contracts worth $31.5 will come off the cap, if the Pacers choose not to re-sign T.J. Ford, Mike Dunleavy, Jeff Foster, and Solomon Jones.  Jamaal Tinsley’s $5.5 million annual bitter pill is finally of the books as of June 30.  Josh McRoberts’ contract is only worth $800K, so bringing him back with a slight bump makes sense.

The Pacers might try to bring Foster back at a reduced salary, but Foster is 34, and he needs to get while the getting is good.  I’m not sure what Foster will do after basketball, but it would seem a safe bet that he won’t find a way to replace that sweet NBA income in the business sector.

So Simon will talk to Bird about his behavior during the press conference where he was predictably honest and transparent about his process of evaluating whether he wanted to come back.  Bird said that if Simon will spend the money coming off the books to go get upgrades, he’ll return.

That put the weight of the fan base squarely on Simon’s shoulders, and that didn’t play well.  So what are the odds for the final result of this meeting (and potentially several others)?

Simon knows enough about business to forgive Bird for being exactly who he is during the press conference.  He also knows that while winning 37 games is a small step forward, making the playoffs energized fans a little bit.  There is positive momentum here for the first time since The Brawl, and to crap on that by flipping the entire basketball side of the front office would be foolish.

The flipside is that Bird has pocketed a significant amount of Simon’s money, and has not yet presided over a team that has won more than it lost.  He gave Jim O’Brien an extension that no one understood, had to be talked into firing him, and has slowed played this franchise into 30th place in attendance.  If Simon asks himself whether Bird is the best guy available for the job, there might be a change.

I don’t know David Morway, and have no idea what he is directly responsible for.  He seems to be in the unenviable position of a guy who could be offered up as evidence of the change that demonstrates Simon is holding someone accountable for poor performance.  No one is safe after the mediocrity fans have endured, nor their decision not to buy tickets or use the tickets they have bought.  Morway has no positive profile among fans, and could be painlessly lanced as evidence that change is coming.

If Bird comes back, Vogel is a good bet to be the coach next season.  He’ll be cheap, and brought the Pacers back from the dead last year.  Bird is a loyal guy – to his own peril as we saw with his extension of O’Brien.  If Bird goes, the odds drop precipitously.  A new president or GM will want to hire his own guy.

It seems unlikely that Vogel, who was simply in the right place at the right time could be one of the 30 best basketball coaches in the world, but maybe he is.  If Bird starts interviewing coaches, who knows what he’ll find.

The possible mutations of the Pacers’ evolution are hard to predict.  Simon loathes change, and for that reason, I think he and Bird find some middle ground.  There is always the chance that Simon decides to go back to the future, and brings Donnie Walsh back, but that’s a long shot.  Bird and Simon will give Morway a nice check to go away, and Vogel will return as the coach.

There will be a lockout after the expiration of the collective bargaining agreement on June 30, and the new CBA will bring changes that will plot the Pacers course for pursuing free agents.  If the cap is lowered but current deals are grandfathered, fans will have to be patient a little longer.

Today begins an era of change with the Indiana Pacers, and I would love to have a seat in the corner of Simon’s office as he and Bird hug or shout it out.