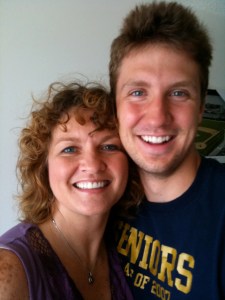 The kid who will graduate today, and the women who gave birth to his body, soul, and character.

Yesterday, we sat in the very room where I type this and talked to Ryan about where he would like to go to high school, or at least it feels like yesterday.

Today, we are at Loyola University in Chicago where Ryan will graduate from college with a double-major in finance and sports management.

He made it through in four years, and actually only had to take seven hours this spring to finish.  That’s a record for the Sterlings that would be like a sprinter clocking an eight flat in the 100 meters.

Not sure where the hell the kid’s diligence and intellect came from, but to go from my unimpressive (which is the kindest word I can get away with using to describe my collegiate effort) work at Indiana to a 3.4 GPA while playing basketball in anything but a throwaway major has to be some kind of historic mark.

This is like a munchkin from “The Wizard of Oz” being the parent of Joakim Noah, or a humorless turd like IU sociology professor Elton Jackson (not a well-known benchmark example for lack of ability to make someone laugh, but he is the least funny man with whom I’ve ever come in contact) being the father of Robin Williams.

[Ed. note – I’m not calling myself an idiot, but processing information as presented to me in cavernous lecture halls is not where I flourish.]

It is amazing how time marches on faster and faster, and all of a sudden a kid you used to throw on your shoulders to take to Cubs games is now a college graduate.

I remember watching Ryan play in his first varsity basketball game in 2003 like it happened last night, and now our work is done.

When I was fired from my job last year, a friend asked whether Ryan’s expenses were paid for.  I told him they were.  He said, “Screw it then.  You’re done.  Your job is over.”  That seemed a little final, but he was exactly right.

We are in the (sort of) enviable position of being finished.  Ryan is who he is, and all the expense and work involved in getting him safely from the cute little baby to manhood has been invested.  Now it’s up to him to figure out the rest – not because we don’t want to continue helping, but because that’s when the real education starts.

When mistakes have no consequences, lessons are only learned in the abstract.  Parents are great buffers between kids and consequences.  The time has come for Julie and I to peel away, and serve in the capacity of parents emeritus.  We are here to answer questions and serve in an advisory capacity, but it’s time for Ryan to jump in the deep end of the pool and test his ability to swim.

What comes next for Ryan is his to determine.  The days are over sitting in the living room as a small but potent family discussing the merits of Cathedral versus Hamilton Southeastern and Lawrence Central High Schools.  Now, Ryan gets to plot his own course and both enjoy the rewards and learn from the mistakes those decisions bring.

Today, we will celebrate Ryan’s work ethic, unique (at least in this family) academic talents, athletic gifts, and ability to overcome adversity.

At the end of the month, he’ll come home to figure out what’s next.  We won’t put him on a clock, but I would imagine that he’ll figure things out pretty quickly.  He’s had something to work hard at forever, and I would assume he’ll miss that.  If not, he can relax for a bit, and recharge his batteries.

We’ll hope that he jumps into the pool before he needs a shove, but we’re willing to do that too.

Those thoughts are for another day.  Today, we celebrate a kid overcoming astoundingly bad genetics to post a very solid academic record at a tough school, and consistently made good decisions on the way to this milestone.

What Ryan is, Ryan is.  My money is on him finding a way to balance work and life, so both are enjoyed.  Our work is done.  The checks no longer need to be written.  The counsel is unneeded.  And the life is ready to be led.

Good for Ryan Joseph – a kid that never gave his parents anything but joy and reasons to feel pride.  He’s the best decision we never made, and his welfare and example were the driving forces behind my maturity as a man.  He is going to be a wonderful manager or owner after he’s a phenomenally gifted employee, and at some point a long way down the road, he’s going to be a hell of a father.

He’s a special kid, and this is a special day for us to reflect on all those moments when he made the difficult choice, when he chose the path least traveled, when he chose work over play, and when he decided to believe in who he is.

No parent is more proud of their son than we are of him.  He is a shining example of how to best live the first 22 years.  We will always have that pride, but now it’s his turn to steer the boat, write the checks, and accept the consequences.

8 thoughts on “My Son Graduates from College Today”