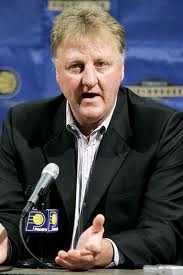 It’s been awhile since fans of the Indiana Pacers didn’t watch the NBA Draft Lottery with keen interest, but tonight will be the night that the Pacers don’t fly team president Larry Bird to New York for the unveiling of the order for the first 14 picks of the June 28 draft.

The Pacers are assured of selecting 15th, and Bird sat before several members of the media at Conseco Fieldhouse to talk about the future of the team instead of waiting in his hotel room to report to his post behind the little game show podium in New York.

The highlights of Bird’s talk were:

Many of the people in the room were Pacers staffers, and it was held in the media workroom, rather than the typical media area.  GM David Morway, president Jim Morris, Greg Schenkel, and media relations chief David Benner comprised roughly a quarter of the crowd.

Bird remains one of the most interesting and entertaining men in sports, and the work of waiting until this offseason for the significant cap room necessary to take the team to the next level is over.  Now it’s up to Bird to spend the money well on  players who can help the Pacers win.

Also expressed was Bird’s desire to bring in good people as well as players.  He wants a “tight” locker room, and has no idea what will happen with the pending lockout set to begin on July 1.

And, even better for me, I finally got some good answers about what Morway does for the Pacers.  As it was described to me, it seems that Morway does almost exactly what I did at Emmis Communications until 2007 as the assistant program director for WIBC (although I was far less well paid and didn’t have a cool title), which is to fill the holes of management.  In other words, he does what is delegated to him by Bird because either Bird doesn’t like to do it or isn’t good at it.

I’ve never been critical or praiseful of Morway because frankly I never knew what he did.  Now that I have a better understanding, I’ll have some empathy for him.  It’s not easy to do work you might rather see re-thought.  Being held responsible for it can be very trying.  That’s not to say that either of us was driven crazy by our respective bosses, but there are always minor differences in opinion.

The Pacers are through step one of rebuilding, and now they get busy with the fun stuff.  For his patience and drafts over the past three years, Bird gets a B+.  If he can do the same thing for the second phase where he gets to build, he will more than justify owner Herb Simon’s faith.

Remember the #8 seed last year?  The Chicago Bulls, who hired the right coach in Tom Thibodeau, and picked up two key free agents in Carlos Boozer and Kyle Korver.  The road from eighth to the upper echelon of the NBA East isn’t that huge a leap – at least it’s not unprecedented.

If Bird and the Pacers can take another leap forward to 45 wins, it will justify the fans’ faith, and the days of the Pacers hoping for their ping pong ball to be pulled so they move into the top three of the draft will be over.