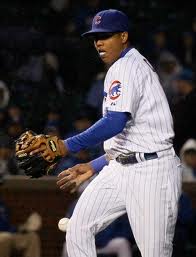 The last time the Chicago Cubs allowed as many as seven runs that were all unearned – Hall of Famer Ernie Banks was a 26 year-old shortstop.  Now 80, if Banks was watching the mess last night in Cincinnati, he would have said, “Let’s play none!”

The Cubs committed four errors in one of the worst performances in a history filled with more than occasional poor play.  Two leads were blown in the 7-5 loss, and that happens throughout a season.  What doesn’t happen very often is the series of little league-esque botched plays the Cubs authored.

The voices of youth coaches yelling, “Don’t throw it around!” rang in my head as I watched the carnage last night.

The Cubs are among the highest paid and worst performing teams in baseball, which is quite an odd combination.  It’s good that owner Tom Ricketts continues to hold no one responsible for the on-field idiocy that his team displays night after night because it gives hope to mediocre management hoping to last another two weeks before the CEO or owner discovers he or she is the reason for failure.

Last year, the Cubs led all teams with an astronomical and comical 99 unearned runs.  By comparison, the Cincinnati Reds allowed 37, the San Diego Padres gave up 32, and Minnesota 33.  The Cubs committed one less error than the worst fielding team in baseball, and also led baseball in walks allowed.

This year, 25% of the way through the miserable 2011 season, the Cubs lead the National League in walks allowed, and are last in all of baseball in walks earned.  They have stolen eight bases – one off the baseball worst seven by the Atlanta Braves.

The Cubs team batting average is second in baseball at .277, but they are 21st in runs scored.  How about that for offensive efficiency!

Anyone who thought Mike Quade would change the culture of the Cubs has been very disappointed in the play of the Cubs this season, and the no-shows at Wrigley Field serve as testimony to that disenchantment.

It’s mystifying to me that the Cubs continue to operate as though a different result should be expected given the construct of their team.  Blaming the injuries of Andrew Cashner and Randy Wells didn’t help, but as they weren’t expected to win Gold Gloves, steal bases, or have any clue as to the strike zone as the stood in the batter’s box, they don’t seem to have much to do with the problems plaguing this group.

Given the enormous amount of money invested in players like Alfonso Soriano, Aramis Ramirez, and Kosuke Fukudome, there isn’t much Quade can do, but there sure isn’t much that he has done.

After 40 games – the quarter pole for the season, here are the grades earned by this group of lost souls in blue:

The Cubs should be a team in transition from old and overpaid to young and hungry, but Hendry continues to dump youngsters from the farm system in exchange for chewing gum with which he tries to plug a dam leaking from multiple gaping holes.

Tom Ricketts continues to refuse to confront the problem facing the Cubs that requires his immediate attention.  Hendry is incapable of making the tough decisions that will allow the Cubs to succeed in 2013 and 2014 because he’s trying to win 78 games in 2011.

I’ll keep watching, so you don’t have to.

8 thoughts on “Chicago Cubs – The Search for the Bottom Continues”