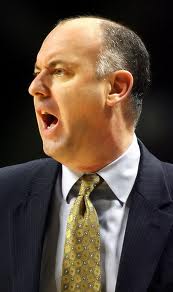 College basketball is nutty.  On its face, the Ed DeChellis to Navy move looks like the act of a mentally unstable man.

Why would a guy leave the Big Ten for a Patriot League gig at a military academy where the academic standards are rigid and very high?

Add to that, Billy Lange, the coach who preceded DeChellis, apparently bolted voluntarily to sit next to Jay Wright at Villanova, and the whole thing seems preposterous.

But what if Lange knew he was on exceptionally thin ice with an athletic department who thought less and less of him, and DeChellis had an all but bare Nittany Lion cupboard with the expiring eligibility of Talor Battle and Jeff Brooks.

Sure, in 2011, DeChellis led Penn State to the Big Ten Tournament final and a berth in the NCAAs for the first time in a decade, but he may have been less than popular with the athletic department too.

DeChellis finished his eighth season on a high note, and after eight years, an AD knows exactly what he has, and what DeChellis didn’t bring a lot of smiles to Happy Valley.

With a record of 117-139, DeChellis’ winning percentage of 45.7% is the lowest for any coach in the history of the program.

It’s likely that DeChellis saw the writing on the wall, and with a salary of $642,000, his buy-out is probably comparatively weak, and striking while the iron is hot to roll to a job where success isn’t measured by success in one of America’s best conferences started to look pretty good.

Annapolis affords coaches a relatively nice life.  Not surprisingly, there are very few calls from players who in in trouble with the law or a girl, and few are in academic distress.  There is almost no chance of running afoul of the NCAA.  Compliance isn’t a big issue when athletes and ordinary cadets (although calling them ordinary seems quite inappropriate) are required to have a congressional appointment for consideration.

It’s all starting to make a little more sense.

What may be tougher than figuring out why DeChellis is leaving is the job of finding a coach to take over a program that is clearly not going to be as competitive as it was last year – overachieving to post a .500 record in the Big Ten.