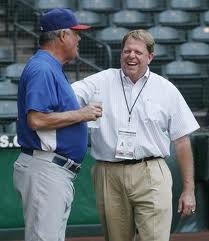 Being fired is unpleasant, and because I am a man of great empathy, I always feel a little pain when I hear about the professional demise of any and all.  Except today!

The firing of Jim Hendry as the general manager of the Chicago Cubs is the best news I have heard in years.  For me, and anyone who loves the Cubs, this is like the resignation under duress of President Nixon.  Our long national nightmare is over!

Hendry by all accounts is a good guy – very personable and decent.  None should have anything against him personally.  I hope he happily plays golf for the rest of his life, laughs loudly every day, and revels in the beauty of every sunset.  As Warren Zevon advised during his battle with terminal cancer, “Enjoy every sandwich.”

Now that the niceties are out of the way, I am thrilled that this man who rewarded mediocrity with many millions, and left fans disturbed by the incessant coddling of malcontents and fools, is gone.

Yes, I sent Hendry moving boxes in May.  It cost me $50 to have them delivered, but it made me feel good.  Maybe he kept them around, and will use them today as he crates up his stuff.

The roster of over-the-hill, oft-injured, bipolar, and indifferent players who have cashed checks Hendry authorized is as long as the trail of tears shed by Cubs fans.  Carlos Zambrano ($18 million), Milton Bradley ($10 million X three years), Aramis Ramirez at $14.6 million per, Alfonso Soriano ($18 X 8), Kosuke Fukudome ($14M per), and on and on have taken the Cubs to the depths of the spend a lot, achieve nothing pile.

The hire of the woefully ill-equipped Mike Quade was immaterial because there was no way that the Cubs were going to achieve anything this year, but showed Hendry to be as inept at measuring the potential of a leader as he was in evaluating talent given tens of millions of someone else’s money.

The Cubs may never win a World Series, but at least the sacking of Hendry gives Cubs fans hope that a new day is dawning.  There is now reason for optimism.

Cubs owner Tom Ricketts might be bright enough to find the right guy.  At least now fans know he has the brains to recognize the wrong guy when he’s sitting across the table from him.

That is took Ricketts almost two full years to know Hendry was a silly man who couldn’t deny his insatiable hunger for additional toys at steep prices.

I don’t know Hendry.  Feeling a sense of loss or pity for a man who has cashed checks worth millions over the past ten seasons as the Cubs chief potentate is not emotion well spent, but I know the sense of immediate loss being fired brings.  I’m sure Ricketts sent Hendry away with enough money to pay off the homes of a dozen recently unemployed men, so let’s save the weeping.

This is a great day for Cubs fans because whoever follows might be better suited to build the winner long suffering Cubs devotees deserve.

There is a reason to smile today – just not for Jim Hendry.  Wish I had sent packing tape with the boxes.