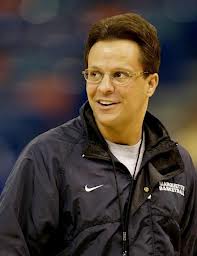 Now I know why I didn’t like this guy – and it had nothing to do with him at all.

It’s been almost five years since Indiana University hired Tom Crean to run it’s basketball program, and that is the same amount of time I’ve taken in trying to figure out what it is I don’t care for in Crean.  Today, thanks to an on-air intervention by 1070 the Fan host Dan Dakich, I have the answer.

I’ve known Dan for 25 years, and hired him to host 12p-3p on 1070 the Fan in 2008 – roughly the same time Crean was joining the IU family.  Dan has always been a guy who asks great questions and holds people accountable for their opinions, so when he got a tweet from a listener as I was a guest on his show that asked me to stop busting on Crean, Dan asked what my problem with Crean is.

Not a tough question for a person with a good answer, but in the past what I came back to were behavioral tics and the opinions of two friends – one of whom worked directly for him at Marquette, and another who was in the media office of a team that played against Crean’s Marquette team annually.  I respect both of their opinions, but need to form my own as well.  Tics aren’t adequate.

Today, I finally said something that made sense.  My issue is not with Tom Crean at all but with the immediate adoration of the students at Indiana who welcomed him to Bloomington like he was the messiah.  Crean took Marquette to one Final Four, and agreed to take over an Indiana program that was in the midst of an absolute revolt.

The guy who hired Crean was the same boob who hired Kelvin Sampson, so why in the hell would anyone in their right mind trust that Crean was any better a choice.

Some bad kids recruited by Sampson had been sent packing by Dan while he was the head coach, and then the rest left shortly after Crean was named coach.  By the time the following season began, Crean had hosted an open tryout, and filled the roster with some recruits like Matt Roth and Tom Pritchard.  Indiana won six games the first season, including one Big Ten game that Roth single handedly shot IU into.  Students at IU loved Crean.

When I was a college student, we behaved like 20 year-olds are supposed to – with disdain and distrust for all authority figures.  Being skeptical is a positive thing for kids who have yet to be squeezed or prodded into compliance by financial needs or professional allegiances.  The students at IU appeared to trust Crean without any concrete reason for doing so, and that bothered me.

There are a couple of things I do know about Crean.  He is tireless, and is always working.  The first time I saw him was at the press event where Eric Gordon announced his decision to forego the rest of his eligibility and enter the NBA Draft.  Crean was a whirlwind as he grabbed all the important AAU and high school coaches who showed up.  He began building the framework for his in-state recruiting before that, but on this day I watched him waste zero effort socializing.  He was a man with purpose, and I would suspect that is exactly how he conducts himself always.

I sat at a table with Pat Forde, Rick Bozich, and IU Basketball SID J.D. Campbell as Crean held court.  His conversation was focused, and he had a  clear agenda of beliefs that he wanted Forde and Bozich to adopt.  He wasn’t manipulative, but he again wasted no time nor effort.

Every moment that I have had with Crean, I’ve tried to figure out who the hell he is, and I think he is the coach of the Indiana Hoosiers.  That isn’t just what he does – it’s who he is.  Every moment during the last almost five years has been spent trying to rebuild this program.  He appears to embody the character the quote, “If you never take no for an answer, you’ll eventually get a yes.”

Crean’s players do some other things too.  They get their degrees, and they get the most out of their abilities.  living life to your potential is each individual’s choice and responsibility, but a coach is employed to help those two things happen.  Crean gets an A+ in both regards.

Oh yeah, after winning those 12 games in 2010-2011, they won 27 last year, and 24 and counting this year as the #1 team in America.  Indiana is tough, outstanding defensively, and explosive offensively with five players on the floor who can score.  What’s not to like?

Today, on Dan Dakich’s singularly superb radio show, I finally figured out that my problem was never with Crean – it was with those who supported him at a time when there was no reason to because if college students refuse to embrace cynicism, who the hell will.  That heavy lifting shouldn’t be left to adults, so I took my anger out on Crean.

Now, with my anger properly assigned to the lemming student boosters living in McNutt, Briscoe, Foster, Wright, and Teter quads, I can evaluate Crean based on what’s important – the quality of the kids playing high quality basketball on their road to Atlanta.