Can Shaka Smart’s smile be this wide anywhere else?

VCU head coach Shaka Smart is going to be offered the UCLA job if he wants it.  Duke assistant Chris Collins has reportedly interviewed for the Northwestern job.  There will be dozens of jobs available this offseason – USC, Minnesota, Ball State, among the many others – and Brad Stevens will be a candidate for many because that’s what always happens.  Coaches should be wary before pursuing any of them.

There is something to be said for being happy, being loved, and focusing upon what’s important.  The chase for a better job, more cash, more stuff, more prestige, more resources, and more responsibility has driven potentially great men insane.

A serious assessment needs to be made of what is important in a life before changing course and making a serious life alteration that appears on the surface to make sense.  Seemingly innocuous shifts in lifestyle can cause mayhem for a marriage, kids, finances, and the ability to sleep.  Sure, we all want professional challenges, but at what price.

Two of the hottest young coaches in college basketball also appear to be two of the sanest.  Shaka Smart is happy at VCU by all accounts.  He and his wife have an 18-month old daughter.  Richmond is home, and he is appreciated there.  VCU loves him and is working to address his needs for staffing  and travel for recruiting.  The only potential fly in the ointment is that his old athletic director – the guy who hired him at VCU – Norwood Teague is less than a year into his gig at Minnesota.  While UCLA appears to be the best job out there, his prior relationship with Teague might be difficult to resist.

Brad Stevens famously shunned a nice gig at Eli Lilly to accept an unpaid coaching job at Butler.  He understands happy.  Indianapolis is home, and it always has been.  Stevens played ball at Zionsville High School, and then went to DePauw University – less than an hour west of Indy.  He and his wife Tracy met at DePauw, and they have two kids.

Reportedly, Brad makes a little over $1-million per year, and while that’s not the $6-million Kentucky’s John Calipari pockets, you can run through 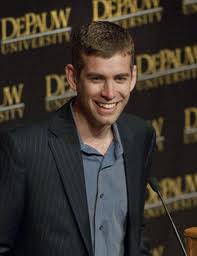 Brad Stevens knows how to work hard and smile.

cash like a fool in Indy without getting anywhere near a million bucks.  If he didn’t already know what happy was, he would have bolted for Oregon a couple of years ago.

People wonder what the next generation of our society’s leaders is going to look like, and I think they will be a lot like Smart and Stevens.  They are two guys who understand that enough can be enough, and that true happiness has little to do with the difference between $10-million in the bank and $15-million in the bank and everything to do with family and friendship.

That’s bad news for the athletic directors like Dan Guerrero at UCLA who believes all he needs to do is identify the best man for the job and then offer him so much cash that he can’t possibly refuse.  Those days might be over, after all how much money makes the headache of unreasonable expectations worthwhile?

Despite winning only one national championship since 1975, the fanbase and administration at UCLA demand banners, and at Pauley Pavillion, the only banners hanging from the rafters celebrate national champions.  Ben Howland coached at UCLA for ten years, and the Bruins went to three Final Fours, averaged 23 wins, won the conference championship four times (including this season), and had the #1 recruiting class in 2012.  Not good enough?

How in the hell can the coach at UCLA enjoy the challenge of working there when the bar for success is so much higher than reality will allow?  This is not 1969.  There are hundreds of good players who show up on campuses every year, and projecting their success is nearly impossible.  Indiana’s Victor Oladipo was ranked 144th among high school seniors in 2010, and may win the John R. Wooden Award as the nation’s top college basketball player as a junior.  Josh Selby was ranked #1 as a high school senior in 2010.  Selby spent a year at Kansas before entering the NBA Draft.  He was taken 49th in the 2011 NBA Draft by the Memphis Grizzlies, and earlier this month was waived by the Cleveland Cavaliers.  He is now playing for the Maine Red Claws of the developmental league.

Will Chris Collins be smiling a year from now if he takes the Northwestern job?

Would you want a job coaching a sport where talent evaluations can wobble so completely out of control?  Building a team to win a championship is a crapshoot, and if the only measure of success is a national championship, happiness the way Stevens and Smart understand it is impossible.

Life is too short to shoot at moving targets, or worse, unreasonable targets.

An employer’s goals need to be specific, measurable, attainable, and timebound.  They need to provide the resources necessary to accomplish them. If not, putting a family through the subsequent mess is bad thinking.  Chris Collins needs to ask exactly what Northwestern wants out of its basketball program.  “How did Bill Carmody fail?” needs to be his first question.  Bad answer, and it’s back to a pretty good life at Duke.  You only get to leave Duke once.  It should be for the right job.  He’s surrounded by some pretty damn smart guys.  Mike Krzyzewski is his mentor and longtime NBA head coach Doug Collins is his Dad.  He’ll get plenty of good counsel.

Life’s too short to dislike any of it.  Stevens and Smart are teaching us that.

3 thoughts on “Advice for Shaka Smart, Chris Collins, and other Coaching Candidates – Go for Happy”