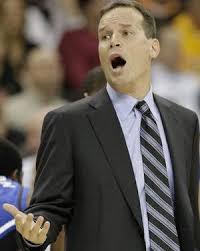 If this is what brand spanking new Northwestern basketball coach Chris Collins looks like when begging, Northwestern bigwigs should see a lot of it for the next six months.

CBSsports.com is reporting that Chris Collins has agreed to be the next head coach at the only major conference basketball program to never earn an invitation to the NCAA Tournament.

Collins is a Chicago native who evidently enjoys a challenges, or maybe he’s tired of winning every year as an assistant coach for Duke.  Maybe Northwestern offered him a ton of money and guaranteed him the resources needed to build a winning program.  That would beg the question, why didn’t they give the same tools to Carmody?

Northwestern isn’t trying to match wits and power forwards with DePaul, Loyola, Northern Illinois, or UIC for Chicagoland basketball supremacy, they are trying to compete with Michigan State, Ohio State, Indiana, Michigan, and the rest of Big Ten.  Their head start is substantial, and closing that gap is necessary to make the Big Dance.

Even with a smattering of outstanding players like Kevin Coble, John Shurna, and Michael Thompson, Northwestern threatened the bubble only a couple of times.

What makes Collins believe he will succeed when others fail won’t be known until the press conference announcing his decision, and that won’t come until Duke is done playing, according to reports that he will continue to serve at the pleasure of Mike Krzyzewski through the end of their run in the Big Dance.

For now, we will have to be comfortable that with advisors who have been around the block thousands of times, Collins made the right call.  Coach K has been Collins mentor since making his first trip to Durham as a freshman-to-be in 1992, and downstate Illinois hoops legend and longtime NBA coach Doug Collins is his father.

It’s safe to assume that even if Doug and Coach K told Chris that Northwestern is a career dead end, they at least gave him a list of needs that he should demand as part of his deal.

Collins will never be as popular as he is while undefeated, and he should use that leverage with enthusiasm to get whatever he might want while still in that honeymoon period.  Once the losses start to pile up, the leash will get tighter and tighter.

Whether Collins is able to win at Northwestern or not will be decided by his actions between now and the start of practice in October.  We’ll see if he has the will to get the school to pony up for the recruiting budget and facilities upgrade needed to challenge the big boys.