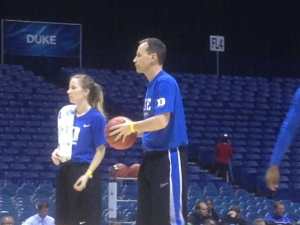 Chris Collins running the kind of public NCAA practice that his new employer has never enjoyed.

Anyone who has ever given notice to an employer knows it takes great discipline to continue to be focused on the task at hand.  I went through it a couple of weeks ago, and despite my best efforts, there is no doubt I relaxed a little bit.

By the measurables, I was still completely there.  I was on time, and remained until the day was done, but the passion for excellence was a hair less, and my willingness to say unpopular things was gone.

Chris Collins has had a similar challenge the past two days.  His Duke Blue Devils prepared for the Sweet 16 game against Michigan State at the same time he was negotiating his first head coaching deal with the Northwestern Wildcats.

After being an assistant for Mike Krzyzewski for 13 seasons, the soon-to-be 39 year-old is going to try it on his own at the only bigconference university never to have been invited to the NCAA Tournament.

I’m sure his intentions are pure, and his discipline strong, but there is no way that in idle moments he isn’t thinking about putting together his staff, and offseason plan for the Wildcats.  Human nature has a harsh gravitational pull, and what’s next  – what he has worked for his entire life – is right around the corner.

There were reminders all around as Duke came out for their public workout at Lucas Oil Stadium as CBS’s Jim Nantz greeted him warmly to congratulate him.  I wasn’t close enough to hear whether Nantz greeted him with a warm, “Hello, friend,” but they chatted amiably for a couple of minutes.  (as though anyone could have a hysterical and outraged talk with the perpetually decent Nantz.

Not to bounce off the subject, but I ran into Nantz in the Big Ten Tournament media buffet at Conseco Fieldhouse four years ago.  Actually, I was trying to figure out whether it was him.  Sometimes, people in real life look just enough different from their appearance on TV that it takes a few seconds to be sure.  Generally, famous people avoid eye contact because who wants to talk to the kind of kooks who are thrilled to meet the famous.  Nantz wasn’t like that.  He stared at me as I tried to figure out whether he was who I thought he was.  That was disconcerting enough that I didn’t say hello or introduce myself at all.  I just turned with my food and walked away, which begs the question whether it’s worse to be verbally assaulted or shunned by some idiot like me.  Or perhaps, he was unflappable as ever and kept his thoughts and temperment on the perpetual autopilot it’s been on for his nearly 30 years at CBS.

Collins seemed plenty plugged in with the Blue Devils as Coach K’s team ran though a spirited workout.  Compared to Louisville’s relaxed shootaround, Duke looked like the Soviet Union’s Olympic Hockey Team.  They were all business and hustle, and Collins was right in the middle of it.

After 13 years of being a solid soldier in the Duke Army, Collins has earned the trust that keeps him on the bench despite being pulled in a different director by relentless emotional physics.

I hope he enjoys this ride with Duke.  It might be his last.