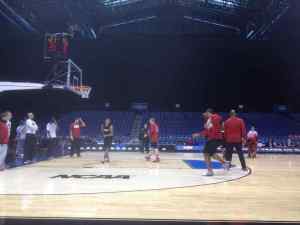 After watching hundreds of workouts and shoot arounds, one thing I know is that using them to predict the outcomes of games is impossible.  Louisville is loose as hell, laughing, shooting, and enjoying themselves.  That’s the way the Cardinals have rolled forever.

I remember at the regional finals in Knoxville in 1983 when Louisville and Kentucky were slated to play for the first time in decades, walking around the team hotels for both the Cardinals and Wildcats, the Louisville players were having a ball with fans in the lobby, and the Kentucky players were stoic when allowed to venture from their rooms.  The game into overtime before Louisville won 80-68.

The only advantage it seems might have been gained was that Rodney and Scooter McCray, Derek Smith, and Lancaster Gordon had more fun the day before the game.  I left feeling bad for the Wildcats – not only did they lose a heartbreaker, but there weren’t any laughs for them the day before either.

Laughs are big with me.  What good is winning is you can’t enjoy it.  That seems to be the overarching philosophy of Louisville Basketball even 30 years and two days later.

There are other similarities that survive from the Denny Crum Era.  Louisville’s DNA requires that it make huge runs to take away all home from opponents.  The Big East Final comes to mind.  Louisville looked for all the world like they were going to get beat and not in a pretty way.  Syracuse led 45-29 with 15:34 to play.

With 5:17, Louisville led 62-51.  That’s a 33-6 run for those of you who didn’t get a C+ that could easily have been a B- in Maynard Thompson’s Finite Math course at Indiana University.  During that run, the Orange went 1-for-7 from the field, 4-for-8 from the line, turned the ball over nine times, and committed eight fouls.

Louisville looks the same at this workout as they did in the lobby of that Hyatt in Knoxville – loose, confident, and ready.  In one of the toughest regional finals in recent memory, the Cardinals look like they are enjoying the ride.