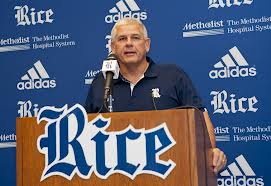 This is Rick Greenspan prior to being an accused xenophobe.

Oh boy.  There was never any doubt that former Indiana University Rick Greenspan is a self-immersed kook, but he has now been accused of being an unrepentant xenophobe – or a guy with a sense of humor on par with Archie Bunker.

Oregon will take the court in a couple of hours in downtown Indianapolis, and they have a power forward, Arsalan Kazemi, who filed a hardship waiver to transfer from Rice – the school where Greenspan fled after being sacked at Indiana.  That paperwork makes very specific allegations about repeated racist remarks by Greenspan to Kazemi, an Iranian.

In addition to Kazemi, Rice employed Marco Morcos, an assistant coach who is a native of Egypt, Omar Oraby – a center who also filed a hardship waiver and transferred to USC, and forward Ahmad Ibrahim – also of middle eastern descent.

Among the specific comments  by Greenspan alleged in the waiver request cited in a Sports Illustrated piece by Thayer Evans:

What can’t be denied is that the waiver was granted, and that if true, Greenspan continues to act like the tool who proudly welcomed Kelvin Sampson to Indiana University, where he took a wrecking ball to the program with his unquenchable need to win at all costs.  His lack of ability in gauging the character of recruits and amoral hubris in luring them to play for the Hoosiers brought disgrace to a proud tradition of doing things the right way at Indiana and resulted in unprecedented NCAA penalties and shame to all connected with the program and university.

There are those who claim the man who served as IU president at the time of Sampson’s hiring, Adam Herbert, made the call over the objections of Greenspan, but I heard the news of the hire from one of Sampson’s lieutenants before the announcement, and he was exceptionally proud that he and Greenspan “Got our man.”  Those might have been the words he used rather than give an unnecessarily detailed accounting of the machinations of the hire, but the glee with which he told me was overt.  If he could have made confetti fall from the ceiling as he said the name “Kelvin Sampson”, he would have.

Greenspan got buildings built, including Cook Hall, in Bloomington, but the body of his idiocy at Army, Indiana, and now Rice has too much bulk to be outweighed by occasional effective leadership.

Over time in a public role, flaws are revealed.  Whether Greenspan’s alleged comments were made out of an irrational fear of people of Middle Eastern lineage, an oddly inaccurate desire to engage and amuse, callous indifference to those he oversaw, or a combustable combination of the three, this guy’s trail of bumbletude has exploded far beyond most men’s ability to maintain or find continued employment in a position as visible as athletic director of an NCAA Division I university.

For more on Greenspan, here’s an oldie but goodie about John Feinstein’s loathing of Greenspan.