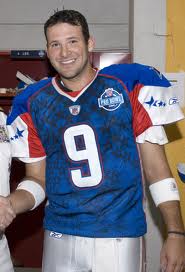 Tony Romo hasn’t worn a Pro Bowl jersey like the one above since 2009.

It seems all that Dallas Cowboys owner/general manager fears is admitting a mistake.  Yesterday, he spent $55-million to let everyone know that he still believes in his quarterback.

Tony Romo will turn 33 next month, and the total for the six-year deal is $108 million extension, but what I have learned after extensive tutoring by the COO of an NFL franchise is that the guaranteed cash is all that matters.  Let’s evaluate this deal as though it’s only going to cost Jones the $55M.

At some point, the amount of cash doesn’t really matter.  If you stack cash as high as the eye can see, doubling it just doesn’t matter.  Nine million a year guaranteed for Romo is stupid on such a grand scale that doubling the money has no effect.

For a generation, Jones has lived in hope and died in desperation.  After doing the right thing often enough to win three Super Bowls, Jones has gone from being the NFL’s Midas to a cooler in Vegas.  That happens a lot to men who are incapable of admitting their own errors.  Correcting the missteps of Tex Schramm and Tom Landry was a piece of cake, but looking in the mirror is hard for a man so confident in his own ability.

That’s how a quarterback with one playoff win enters the last phase of his career, and is rewarded with money beyond the dreams of avarice.

Over the last three seasons, Romo has been 17-21 as a starter, and zero playoff appearances.  The value of any player is in how many wins he is capable of bringing a franchise, and as the sun begins to set on Romo, his ability to lead the Cowboys to a championship doesn’t justify that expense.

Jones had to restructure somebody’s deal because of salary cap issues, and Romo is the beneficiary of that poor planning.  The Cowboys will be $5M to the good this season as Romo makes $55M.

Romo is the kind of his risk/high reward quarterback that can bring you back from the dead five times in a season as he did last year, leading the NFL in comeback wins, or he can lose you games by leading the league in interceptions – as he also did with 19.

In the four games Romo threw more than one pick, the Cowboys were winless.  In games without a pick, they were 5-2.

Romo was third in the NFL in passing yards, but before we have a parade and you start thinking I’m ready to argue against myself, in the five games where Romo threw for more than 320 yards, the Cowboys were 1-4.

With a hard cap system like the NFL has, the allocation of money is the most important area of concern for management.  Spending must be done with great care, and the reckless rewarding of a quarterback who rewards and penalizes in the same measure is not logical.  That’s nothing new for Jones, whose hubris continues to make him one of the worst GMs in football while being one of the best owners.