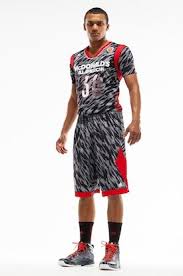 Even in the staged publicity photo, you can’t see the number in the West unis.

There is one reason to watch a high school all-star basketball game like the McDonald’s All-American contest that was played last night in Chicago – to identify and assess the kids who will be freshman at the university of which you are a fan.

After all, nobody has any affinity to one of the geographically assigned teams.  The East vs. West is not a compelling reason to care about the game.

The numbers of the backs of the uniforms the players where are key in figuring out which kid is which.  They were nearly impossible to distinguish from the body of the jerseys, so separating Indiana bound Noah Vonheh from Kentucky signee Julius Randle was difficult without stopping the video to examine where the reflective silver began and the red cloth began.

For the teams on the West, the camouflage pattern did exactly what the military designed it to do – make the identification of players difficult to impossible.

The are thousands of examples of overstepping from what works to what’s idiotic all because technology allows it.  Aluminum bats, synthetic leather basketballs, muzak in elevators, adjustable cup holders in cars, microwave ovens, chewable Spree, HD Radio, and vibrating razors are a short list.  To it, we can now add the jerseys the high school players wore last night.

Add the less than on point description of the game on ESPN from Jalen Rose and Jay Williams who rarely mentioned the names of the players, and what could have been a fun look for Kentucky fans who were keenly interested in the six – SIX – recruits playing at the United Center, was a night of asking, “Who’s that guy?” hoping anyone nearby had a clue.

Once I locked in on Vonleh, I liked what I saw.  He was completely uncomfortable is the one-on-one digression of basketball this game rewards.  He’s clever around the rim, can rebound, and is an athletic freak.  What that means for next season’s Indiana squad is anyone’s guess.  One thing for sure is that the Hoosiers don’t have one of him right now.