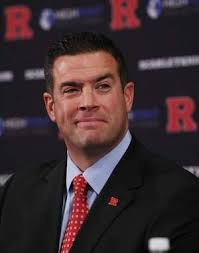 Rutgers AD Tim Pernetti did a deal worth millions, so his irresponsible decision to only suspend Mike Rice won’t be fatal.

It took a day and a half, but someone associated with Rutgers University blurted out a sensible comment.

The most compelling question that remains in the still unfolding story is why athletic director Tim Pernetti continues to hold on to his job.

Pernetti is the guy who chose expedience and convenience over what was right for the student-athletes playing for Rice.  The video showing Rice kicking, shoving, and throwing basketballs at the players, in addition to the outrageous insults hurled at the kids repeatedly was only worthy of a three-game rip and $50,000 fine, according to Pernetti.

The comment by a person close to the Rutgers Board of Trustees was that Pernetti’s job is safe because he successfully negotiated Rutgers’ entry into the more financially lucrative Big Ten.  While an indefensible position, at least it’s an honest accounting of the only logical explanation for his retention.

It’s outrageous that an institution of higher learning funded by tax dollars would behave with such pragmatism, but it’s also completely predictable.  Self-preservation and the pursuit of cash are the two biggest motivators in American business, and anyone mistaking colleges as a haven far removed from the instincts and lessons of the private sectors haven’t checked the salaries of the people running them.

We can be outraged by the acts of Mike Rice, but throughout history the attempts of successful people to distance themselves from exposure should have calloused us against the actions of Pernetti and Rutgers president Robert Barchi to stay ahead of the posse searching for decency in this sea of debauchery.

There is a quaint sentiment among many not closely involved in a scandal that a bad act requires a consequence that serves as a meaningful disincentive for those who follow.  For those in the middle of a scandal, the allure of a cover-up is just too great.  The instinct for survival overrides all else, especially among those savvy enough to have risen to the level of athletic director and president of a university.

Honesty wins out in the end once in a while, and the public likes a just resolution.

Maybe the comment about Pernetti’s survival being the result of overt pragmatism from the person close to the trustees at Rutgers will help move this madness toward an honest if not just result.

Our expectations for honorable behavior need to be adjusted because there is no guaranteed payday for the honorable, only a good night sleep – and that’s not enough.

At a place that purports to teach young adults lessons to last a lifetime, that’s worth the price of tuition.