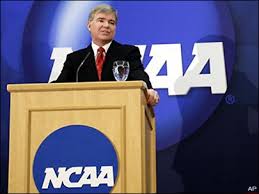 NCAA chief Mark Emmert is frustrated, and that was clear in the defiant tone at his press conference yesterday.  He has good reason to be frustrated.  The problems are everywhere, and the solutions are impossible to enact.

That will turn a guy who had high hopes when reporting to Indianapolis for duty a little sour.  People want answers for the scandal filled mess that is collegiate athletics, but Emmert can’t provide any given the tools at his disposal.

The problems include players getting paid to play by boosters and agents, players not getting a percentage of their licensing, kids being abused by coaches, kids earning nonsense degrees, the one-and-done rule, academic work being done by academic advisors, and a rule book so complex that it takes a team of compliance officers at every member institution to understand them.

The solutions involve a team of 59 investigators who cannot compel anyone to talk, and the reality that the NCAA is nothing more than an oversight organization to which schools belong, which means that the NCAA only has the power allocated by those schools to monitor their own behavior.

Reform under those parameters will happen slowly if at all.  There are plenty of movies from the 1930s, including the Marx Brothers in ‘Horse Feathers’ and ‘Hold that Co-ed’ with John Barrymore.  You want to know how little corruption in college football has evolved?  Watch those movies.

Coaches earn up to $6-million per year to do one thing – win championships.  If that means that a kid is going to get a general studies degree instead of the education he needs to get ahead in business, the coach will shove him into general studies.  If a kid can help win a championship, but is dumb as a sack of doorknobs, a solution will be found.  If a kid has the potential to earn millions in the NFL or NBA, someone is going to give the kid money to get close to him.

Those are realities.  No rule or penalty is going to stop those behaviors.

Emmert is the head of the organization charged with keeping the playing field level, and not forcing schools to go into their pockets to keep athletes happy.

As Emmert alluded to several times yesterday, the schools bear the majority of the weight in making sure that rules are followed, and that kids leave having received a reasonably valuable education.  That the NCAA is seen as the last best hope in mandating fairness says a whole lot more about the pervasive amorality among the schools and the public ignorance in where responsibility should really lay.

When the Rutgers sadness unfolded this week, the questions were not only asked of coach Mike Rice, AD Tim Pernetti, and president Robert Barchi, they were asked of Emmert – as though Emmert should need to spearhead rules changes to address coaches using physical abuse to punish student-athletes.

That job belongs to the school, and they are the people who should be held responsible.  Because the media doesn’t get a chance to quiz university presidents very often, the weight is thrown to Emmert.

I’m neither a fan nor detractor of Emmert.  He seems a well-meaning fellow who say all the right things, but acts with the speed of a bureaucrat to address issues.  The inertia in collegiate athletics is a worthy foe, and changing the direction of the organization to address the public dissatisfaction in the repeated corrupt behavior of coaches and their programs is like turning an aircraft carrier.

The real angst should be directed toward the university presidents and athletic directors.  As long as the boosters’ cash flows to schools because of wins, and dries up with losses, the motivation for coaches to serve as mentors and leaders for the group of human beings they are entrusted to shepherd through the end of adolescence is weak.

That has nothing to do with Emmert.  Holding him accountable is part of the shell game being played by the university administrators to help preserve their lavish lifestyles.  Deflecting responsibility isn’t a mode of leadership, but it is the management strategy of choice in collegiate athletics.

So if you are unhappy with kids earning meaningless degrees, getting grades through scurrilous means, or being paid by agents/boosters, stop bitching about Emmert and his staff, and direct your anger to the schools.  If you are pissed off, and still write checks to your alma mater, stop it.

If you write a check to subsidize an operation you believe to be corrupt, you are the stooge responsible for this madness.