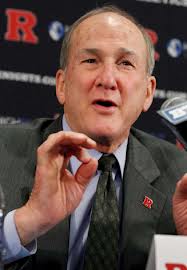 No, President Barchi, it’s not okay.

The goal for any administrator is to silence the chants for someone’s head before their names are in being shouted, and Rutgers president Robert Barchi started to hear his name a little too often for his liking.

So Tim Parnetti is a goner, and he was always going to be a goner.

From the very beginning, Pernetti was going to be the guy who paid the price because he acted like a coward when he first saw the video.  At the point when the video was seen on ESPN, Pernetti was a ghost.

Now, what is going to happen to Barchi?  While it was a certainty that Pernetti was going to get shot, Barchi is 60/40 toward him being out.  His unpardonable sin was that regardless of whether he joined Pernetti to view the practice tape or not, he screwed up.

If Barchi saw the tape shortly after Pernetti saw it on November 26th, he acted like a coward in protecting the legal interests of Rutgers at the expense of the student-athletes exposed to the routine violent outbursts of basketball coach Mike Rice.

If he decided not to watch it, he was derilict in his duty as the chief executive of his university.  The only reason not to watch would be to avoid culpability in the decision to punish Rice.

Either way, he’s weak enough to be justifiably attacked by politicians looking to be on the right side of this disaster.  When politicians can take the high road in a very visible way, it means votes, and if that means the ouster of a university president, that’s a small price to pay.

There is a question as to whether Pernetti was fired or quit, but the truth of the thing is that Pernetti would be been fired regardless of whether he resigned.  This was a negotiated separation that will certainly include a confidentiality agreement designed to protect Barchi and anyone else who would get caught in the wake of any honesty that he might offer.

The strategy is to build legal flood walls, and whether it’s announced that Pernetti was fired or resigned, he almost certainly got a check to sign the agreement, which is even more heinous than what behavior is known by Barchi.

This story continues to roll, and the chances are good that it will roll right over the top of Barchi.

2 thoughts on “Rutgers AD Tim Pernetti Fired – Noise Too Much for Barchi, Who May Be Next”