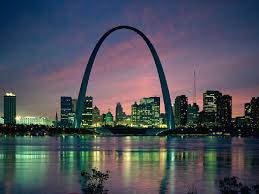 St. Louis is a very underrated town when it comes to fun.  Before living here for almost two years, I had almost never visited since I was a kid.  It didn’t take long to learn I made a mistake almost every time I opted no to make the 3 1/2 hour drive from Indianapolis.

For the youngsters who like to think they can drink beer with the best of them, you better do some training to hang with the residents of a town that was raised in the shadow of the Budweiser Brewery.  This is a town that loves beer.  They drink it at lunches.  They drink without a reason.  They drink lots of them.  And they drink Bud or Bud Light.

This is a city that doesn’t mind giving the stink eye to guests, and the term ‘guest’ applies to anyone didn’t go to high school here.  If you order a beer, make it an Anheuser Busch product, or you will get odd looks.

There are certainly are lot of choices for families visiting this river city, but my son was 22 when I moved here, so I have no working knowledge of the Science Center or other kid friendly activities.  This list is purely for those untethered by the whines of children.

10 – Broadway Oyster Bar – If you stay downtown, the bars and restaurants are all reasonably good.  It’s damn near impossible to find a bad meal in town, and the proximity to the brewery makes it likely the beer is equally fresh everywhere, but the Broadway Oyster Bar (on Broadway just a little south of Interstate 64) is a great spot for New Orleans style food and live music.  It’s a little eclectic, but when the weather is good, the tent over the performance space is retracted, and it becomes a spectacular nightspot.

9 – Lumiere Casino – You can’t miss this place.  It’s on the north side of downtown a four-iron from the Mississippi, I don’t recommend gambling at the casino, (it’s not really gambling as much as losing), but watching other people lose is a great way to kill an hour.  Watching people who clearly don’t have a lot of money wager so little even winning isn’t worth their time is hilarious.  The people wave their hands in front of the screen with differing level of nuttiness as though that could have a positive influence on the result.  You want a lesson in how easy it is to get people to part with their cash, it happens 1,000 times per minute at the Lumiere.  “Living in hope, dying in desperation” should be their motto.

8 – Mardi Gras – For those who are repelled by the amateur hour that is Mardi Gras in New Orleans, the long drive, or a combination, the second largest Mardi Gras celebration in America is in St. Louis.  The parade is a total mess with boob flying and flopping everywhere.  It kicks off at 11a, and by 3p the streets of Soulard (the neighborhood built back in the day to house brewery employees) are filled with the wobbly and incoherent.  Unpleasant looking women are much more likely to show you their wares for a cheap string of beads, but the attractive and drunk are quite willing as well.  It’s worth a trip once as a slice of life adventure, but more than that is just punishing yourself.

7 – Cardinals Game – I would recommend coming to town for a weekend series.  Hotel rooms downtown are cheap, and the ballpark is fabulous.  The best thing about the stadium is the group of intelligent fans in it.  After a lifetime of sharing space with Cubs fans more focused on drinking a beer an inning, listening to the deep baseball conversations of Cardinals fans who choose to actually watch the game is a joy.  Two World Series wins in the last seven seasons have primed the passion pump, and most games are near sellouts.  Get tickets early, and enjoy a weekend of baseball.

6 – Eat at 360 – There is a restaurant/bar on top of the Hilton that overlooks Busch Stadium.  The fish tacos are great, and the view during a Cardinals game is awesome.  You can sit near a fire pit, enjoy a meal, and watch the game (although following the ball is less than simple unless you have the eyes of a hawk).  There can be a line for the elevator, but it moves pretty quickly.

5 – Play golf – St. Louis has a middling repution as a golf town that is entirely undeserved.  The golf in the Gateway to the west is really good.  It’s just far enough south to accommodate Zoysia, a that’s more fun than Bent – at least for me.  I hit down on the ball, and take a heavy divot.  If I’m playing three or four times in a week, all that shock takes a toll on my elbows and shoulders.  On Zoysia, there is a little more bounce and less give.  No need to go to the Carolinas to play – there are dozens of excellent tracks in St. Louis.

4 – Eat on The Hill – Fans of Italian food should come to St. Louis just for that.  There is an Italian neighborhood where time has stood still for generations (the whole city is like that).  Houses aren’t listed with real estate agents, they are quietly mentioned to neighbors who might know someone who would like to move there.  The restaurants throughout St. Louis aren’t almost all family owned, and that it true on The Hill.  I could recommend specific places, but I’ve never gone there looking for a specific place.  I’ve gone without any agenda or destination in mind, and have always left very pleased.

3 – Go to the Arch – I’m not recommending a trip up in the thing.  That’s a pain in the ass, and the reward is a view that offers nothing memorable.  What you should do is walk into the staging area underneath the thing, and watch the movie made about the construction of the tallest monument in America.  The way the Arch was designed and assembled was fascinating.  That no one fell off the thing as it went up is incredible.  The projection, if I remember correctly, was that 13 people would die during the construction, but none did.

2 – Tour the Budweiser Brewery – Sure there are two free beers at the end, but the interesting part is the history of the brewery that churns out enough Budweiser each day to keep all the frats at Indiana University stocked for a millennium.  The Busch Family built a school on the grounds for the children of employees, and when prohibition went into effect, production switched to a non-alcoholic beverage called Bevo.  There are bunches of arcane and odd details in the tour that make it worthwhile even without the free beer.

1 – See a show at either the Peabody Opera House or the Fox Theatre – These are beautiful buildings with ornate fixtures and incredible acoustics.  Ultimately, the pleasure you gain from seeing a theatrical production or concert will depend upon the quality of the show, these are two houses with great history and beauty.

There are plenty of things to do beyond this list – like going to Rams and Blues games.  Those experiences are not fundamentally different from what goes on at similar events in other cities.

Everything downtown is walking distance, making St. Louis a convenient stop for tourists on a budget.

2 thoughts on “Ten Things to Do in St. Louis When Visiting”