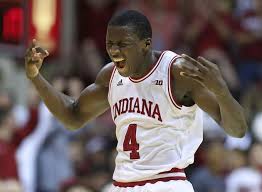 Let’s just pray Victor Oladipo gets drafted before Detroit picks fifth. No one deserves to spend his early 20s in that purgatory.

Victor Oladipo will leave Indiana University with some unfinished business.  He’s forfeiting 25% of his college experience to roll with the pros in the NBA.

Good for Oladipo because he is going to be a top ten pick, and maybe a top five pick.  Because Oladipo isn’t a moron who who buy 12 Bentley’s, money will stack up from that first contract that he will never run through.  Bad for Oladipo because you need to embrace a worry free lifestyle for every second you can while you have it.  That life ended with his announcement.

There is a lot of good too:

Victor is one of my favorite college athletes.  He’s a great interview, and deserves whatever rewards in which he decides to indulge.  He’s been focused on being the best player he could be since getting to Bloomington just under three years ago.

His life is going to change, and not for the better in every way.  That’s the reality of the situation.

People spend four years (or six in my case) trying to beat a path out of town.  A year or two after leaving, we figure out that life was pretty damn sweet.

Oladipo is going to figure that out, but no one can blame a guy who has gone from being the #144 ranked senior in the class of 2010 to being one of the best five amateurs in the world.

Good luck to Victor Oladipo, a student-athlete who embodies all that being a good Hoosier should mean.