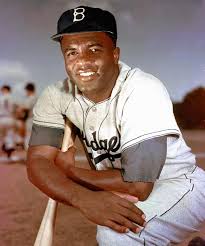 Today, the thought of a man or woman being denied access to earn a living because of race is crazy.  America has an African American president, CEOs, and a litany of athletic accomplishments that were produced by blacks.  Sixty-six years ago, one man’s behavior as the first made all that came after possible.

Jackie Robinson accepted a challenge from Brooklyn Dodgers general manager Branch Rickey to keep his anger inside him as teammates, opponents, and fans unloaded unending torrents of fear-based invective.  He set an example that successfully diffused ridiculous concerns about interracial – well, everything.

Whoever first said that ignorance is bliss was a fool.  Ignorance is a necessary tool for the manipulators who try to exclude.  The fearful loathe change, because change takes society to a new place, and ‘new’ means we haven’t been there before.  The unknown can be thrilling or scary depending upon perspective.

And there were more people than any of us would like to believe who were outraged that Robinson became the first black member of the very exclusive club of major league baseball players.  That put Robinson in the line of fire for those fearful and ignorant men and women who saw that change as a challenge to what they embrace as a purity of the national pastime.

That people under the age of 30 can’t remember a time when overt racism was practiced is thanks to Robinson’s patience, coolness, and ability to wake up everyday looking forward to playing a game rather than dreading the unending hate that he faced in cities where segregation was the accepted way to deal with “black problem.”

Except in stories that deal with history, I can’t remember the last time the word segregation was used in a news story in print or television.  That’s Jackie Robinson’s legacy, and the reason that the number 42 was retired by all 30 major league franchises.

We tend to bury the less savory parts of our past under a whole lot of smiley rhetoric about how far we’ve come – how enlightened we are – but that evolution continues.  The racism that was out in the open and accepted by the majority in Robinson’s time is now spoken only in hushed tones after a quick glance around the room.

Less than two years ago, I asked a co-worker about the Metrolink in St. Louis as a way to get from the airport to downtown, and she told me, “Oh you don’t want to take the Metrolink.  I goes through areas where it gets dark early.”  Yes, the idiots are still lurking, but there are less and less of them.  That’s Jackie Robinson’s legacy.

Picking on the weak is easy.  The intimidation game is what kept racism alive for so long.  Punching a bully is easy, but can ignite a larger group of bullies.  Bullies rely upon a response of either violence or fear to justify their hate.  Robinson ignored the bullies and went to work everyday.  The discipline needed was extreme, and the result was that the bullies lost all power.

Racism didn’t end with Robinson’s controversial entry into the majors or his graceful exit.  The Watts riots occurred almost a decade after Robinson left Ebbets Field for the final time.  Even the most logical and moral changes take time.  Changing the belief structure that led to the Civil War is a glacial evolution, and while it took the brave acts of many men and women to get us to where we are today, Robinson’s legacy continues to inspire.

There is more to be done in order for all men and women to value one another based solely upon the content of their character, but shoving the idiocy of racism into smaller and smaller places where people have to keep their hate filled rhetoric to a whisper is a great accomplishment, and it belongs to Jackie Robinson as much as any person.

My hope for the movie is that they didn’t Hollywood it up too much.  Some lives and actions require no embellishment, and Jackie Robinson’s is certainly one of them.

One thought on ““42” Will Celebrate Importance of Hero Jackie Robinson”