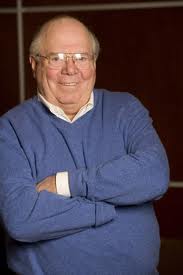 For all of Jim Nantz’s “Hello friends” saccharine blather, and his rehearsed and pseudo-poetic commentary, the broadcaster who is most associated with the Masters is veteran Verne Lundquist.

His “Yes SIR!” after Jack Nicklaus’ birdie putt on 17 during his miracle 30 on the back nine of his final Masters win in 1986 is the most iconic call in the event’s history.  Second would likely be Lundquist’s, “Here it comes…Oh, my goodness!…OH, WOW!! IN YOUR LIFE, have you seen anything like that?” after Tiger Woods’ chip on 16 in 2005.

Lundquist does two things as well as anyone in media.  He allows the event to determine his commentary, and he seems to genuinely enjoy what he sees.  It should be logical for anyone calling a sporting event to say what you see, and have fun doing your job.  Oddly, those who pre-determine the plot of the event before it begins outnumber the men with enough confidence in both the event and themselves to let the narrative play out as it happens.

It’s not exactly digging ditches or brain surgery to describe a golf tournament, but Lunquist makes watching The Masters more enjoyable because he enjoys it.

I don’t know Lundquist personally, but he communicates clearly his belief that he is a very lucky guy to be in his position.  The work to prepare for a broadcast – more so for the football and basketball games he works – can be a little more daunting than many would think.  The only time viewers and listeners hear the importance of the prep work is when it hasn’t been done, and people make critical errors during a game.

That never happens with Lundquist.  At the age of 72, he is every bit as solid as he was as the play-by-play voice of the Dallas Cowboys beginning in 1967.

He’s happy, congenial, prepared, professional, and best of all his words and emotions match the moment.  In a profession where evaluation is almost always subjective, Lundquist has done what in my mind has been consistently wonderful work.

The Masters will move along without the current roster of broadcasters, just like it did after Chris Schenkel, Vin Scully, Pat Summerall, and Ken Venturi left the booth.  The man who will be missed most is Lundquist – the empathetic and gregarious voice of the 16th hole.  He doesn’t just see correctly what happens at Augusta National, he feels it.  He’s there with us.  He’s there for us.

It’s fitting that he works The Masters – because he is one himself.