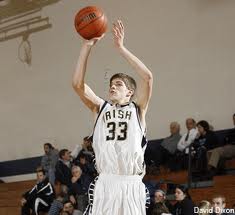 Good kid, this Collin Hartman.  The Cathedral student will head to Bloomington in June to prepare for his freshman season at Indiana.  The road he’s taken to one of college basketball’s premiere programs has been an honest one, and a major influence on his development as a person and a player is his Mom.

One of the games I play to keep myself amused when I go to an AAU tournament is to try to pair the kids with their parents.  There is something cruel about these events for parents.  They die a little with each missed shot, and sit a little taller with every make.  When a kid gets fouled but there is no whistle, the parents yell.  I can usually tell what parent(s) belong to what kid within a half.

It took me no time a couple of years ago at North Central High School to know which of the women in the gym belonged to Collin.  He was coasting a little bit (playing seven games in three days requires just a little coasting), and a lady called Collin a name that I don’t remember but conveyed her mild displeasure.  He shot her a quick glare.  It made me laugh.  There was no anger – just a funny shared moment of two people very comfortable being honest with one another.

What Collin told me in the video below about his Mom wasn’t surprising: