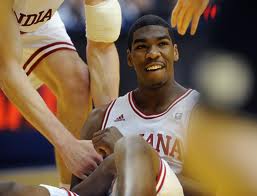 Remy Abell’s support system is a little late in helping him out of his decision to transfer.

Michael Pointer of the Indianapolis Star has reported that outgoing sophomore guard Remy Abell’s mom met with Tom Crean to ask him to allow her son to return to the team for his junior season.

There are few means less effective to effect change than by having a parent intercede on your behalf, and even fewer things less enjoyable for a coach than to have a mom in the office for any reason.

Abell’s high school coach told the Star that the reason for his decision to walk away was prompted by both a desire to play more, and due to his friend Cody Zeller leaving IU for the NBA.

And Tom Crean could not care less because he is not the parent to his players – he is the man at the helm of a very important basketball program.  Indiana is better served by having Abell’s scholarship available for one of the incoming freshman, than by Abell’s return.

The decision by Abell may have been made and communicated hastily, but at the point he told Crean of his intention, the ship pulled from the dock.  What port it reaches next is anyone’s guess, but there is no u-turn available – with or without Abell’s Mom’s plea.

An education at Indiana University doesn’t occur only in classrooms.  College is a nice incubator for tomorrow’s employees.  Abell has learned through this episode that petulance is not a good business strategy – assuming that he agrees with his Mom that he should be welcomed back to the Hoosiers basketball team.

Actions have consequences, and if your strategy is to go to your boss with a threat or demand, you need to have a plan B, because if doesn’t share your assessment, your threat might actually be seen as good news.

Jeff Rabjohns of peegs.com reported a view minutes ago that Abell’s decision will stand.  Of course it will.