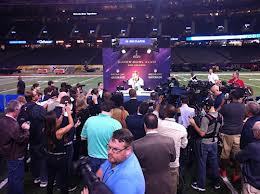 At Media Day during Super Week, it’s easy to build your brand, but it can start long before.

This week, I spent a little time with two excellent high school basketball players who will move on to big time collegiate programs.  I told them both the same thing, every chance you have to talk to the media, take it with a smile.

Given a base level communication skill set, the media can open doors help build a brand that can be leveraged for many things – cash, career after sports, charity, etc…

Many athletes look at the media as a necessary evil, and that would be an improvement for some.  When Jalen Coleman and Collin Hartman took the time to answer my questions, they aren’t talking to me.  They’re talking to the thousands of people who will watch the video.

Because of their position of interest among college basketball fans, people will seek out their videos and evaluate them based upon their performance.  There are CEOs, ADs, managers, and alums who own a business that will watch.  Everytime people get a chance to watch them talk, an opinion is formed and cemented.

Social media is no different.  Assume every employer will immediately check twitter and facebook feeds when a resume’ comes through.  That’s true for everyone, not just athletes.  I would check for two things – first, is the person the kind of moron who would post pictures of themselves in the midst of drunken hijinks; second, because I’m in the media, is the person aggressive in self-branding and does he or she understand what a good take is.  People who know how to execute point two will have a significant twitter following.

Most big schools and professional franchises monitor their players’ social media use, or at least take a proactive role in educating them on appropriate uses, so screwing up never occurs out of ignorance – just stupidity.

People who are polite, accessible, and articulate will quickly become favorites of the media, and will get more and more opportunities to talk to thousands and thousands, if not millions of people, and with every impression, a kid may be talking to a future business partner, boss, or investor.

Here are some dos for interviews:

Using common sense is the key to everything, but we all know there are lapses – especially for college students.

There is a guy named Joe Staysniak who was a big deal offensive lineman at Ohio State, was drafted late, and played seven years in the NFL, including four with the Indianapolis Colts.  Since his retirement, he has made his living as a radio host in Indianapolis.  That happened because Joe was a great guy to the media when he played in Indy.  The decision to hire him was easy, not because of his talent, but because he was liked and everyone knew he understood how media works.  The work of building his brand among the hiring managers at WIBC (where he was hired) began in the second of his four years with the Colts.

There are thousands of people in Indianapolis who listen to Joe on the radio, but have no recollection of his playing career – or even the fact that he ever played in the NFL.

The time to get busy building a career in the media is when the media wants to talk to you.  Don’t wait until you are no longer playing to build the relationships that can help you in the door.

There is no better workshop to develop the skills needed to work in the media than being willing a participant in interviews.  Say yes.  Build a positive brand.  Reap rewards.