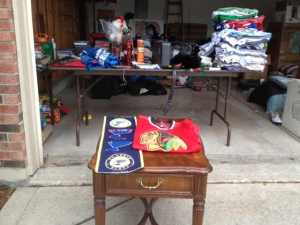 A small sampling a some of the junk/treasure we are allowing others to welcome into their homes.

But $260 for one hour of sitting in the cold talking to strangers isn’t so bad.  We had boxes and boxes of stuff that had become obsolete in our lives.  Turning it into a little cash isn’t a bad idea.

I could have played hard ball, but truth be told I just want to move this crap.  If someone is willing to hand me $20 for a $200 mixer, I can tell that person to go to hell, but then I’m stuck with a mixer I’m never going to use again – or more accurately that my wife won’t use again.

It’s only use for us was to hide vegetables in smoothies because our son refused to eat them otherwise.  He’s 24 now, and his diet is his own.

My Dad’s attitude about garage sales was quite different.  They were an opportunity for him to exercise some economic justice, and he enjoyed the hell out of them.  People who tried to negotiate, a garage sale tradition, did so at their own risk.

This exchange actually took place at one of my family’s garage sales:

Buyer: How much for this”

Buyer: I’ll give you five.

Dad: Get the hell off my property!

Dad didn’t like dickering.  If you asked what the price was, and he gave you a price – that was the price.  Any disagreement was met with flash anger, and loud admonishments.

Maybe it’s because of those episodes that I am the easiest touch in the history of capitalism.  If someone wants a DVD I’ve had in a box for five years, I’m going to make sure he gets it.  If I get rid of it for a buck, that’s fine.  I’ve made a buck, and have taken a step toward a less cluttered house.

Let’s face it, the people scrounging through other people’s crap to make a living are not part of America’s upper crust.  They deserve a bit of a break, and if that robs me a couple of dollars, I just don’t care.

At the risk of sounding like an idiot, I just don’t care enough about money to make a scene over selling a tee-shirt I’ve never worn for $3 instead of $1.  Yelling at a group of ladies because I’m tired of their trying to get me to back off my price on a toaster is not why I sit in a garage.

The truth is that we displayed the stuff without pricing them.  My economic theory is more determined by what I believe the micro-market will bear within each transaction.  I assess the person’s ability to pay, and adjust the prices accordingly.  This is dynamic pricing conducted on a separate scale for each transaction, which is completely insane, and if practiced on a macro level would cause relentless rioting in the stores and streets.

It makes for some unpleasant moments when there are more than one shopper in my garage at one time, but the confusion is worth the result – that the poor are thrilled, and the comparatively wealthy feel the deck is stacked against them.  If I can flip the tables briefly in favor of the people who scrape to put clothes on their kids’ backs, I could care less about a couple of bucks.

One lady came in and asked about old baseball hats that were in a box.  The box was filled with junk that I thought would never sell.  She got the hats and a much better price than others on some valuable stuff.  Whether that’s fair, I don’t care.  My garage sale – my rules.

In a neighborhood garage sale, if 40 houses are trying to move attic-bound trinkets, there are 40 mini-economies in play.  Some strict – like my Dad’s, and some very relaxed – like mine.  Most are in the middle.

My only hard and fast rule is that nothing gets re-crated.  We sell all inventory to the walls, and by 10a tomorrow, this sales will have ended with some poor kids clothed, and some rich people denied.  I’ll have enough money for tickets to a couple of concerts this summer at the former Deer Creek/Verizon Wireless Music Center.