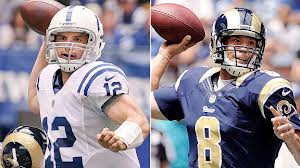 Andrew Luck (L) and Sam Bradford (R) will be the starting quarterbacks in Super Bowl L.

In just under three years, the two worst teams of the 2011 NFL season will meet in Super Bowl L.  The host city is yet to be determined, but the teams and the reasons for their movement through the next three seasons into the NFL Championship are clear.

It’s often said that you need to get bad – really bad – in order to get really good.  The Colts won  Super Bowl XL because they were terrible in 1997.  The woes of that season turned into the #1 overall draft pick, and the Colts took Peyton Manning.  If they had sucked a little bit less, Colts fans would likely still regret drafting Ryan Leaf.

The St. Louis Rams turned poor performance into an abstract art from 2007-2011, tallying an NFL history worst five year record of 15-65.  In 2009, they hit their nadir with a 1-15 mark that earned them the right to draft a franchise quarterback in Oklahoma’s Sam Bradford.  He’s yet to reach his potential, and while it’s easy to dismiss Bradford as a bust, there are mitigating circumstances.  A high ankle sprain robbed him of most of his second season, and this coming year will be the first with the same offensive coordinator for a second year.

The Colts lost Manning for the 2011 season, and parlayed that loss to a miserable 2011.  Hello, Andrew Luck.  Leave it to the team with the most stable quarterback situation in football history to lose their guy just at the right time to draft who many call the best quarterback prospect in since fellow Stanford alum John Elway.

It is not enough to be really bad.  A team must be bad at the right time.  The draft in 2012 was elite through the second choice, and both the Colts and Rams took full advantage of that.  The 2013 draft appears to be completely bereft of elite level talent, but it’s very deep, so the Rams at #16 and #22, and the Colts at #24 are again in the right place at the right time.

Both teams need to take the right people one more time this year to set themselves up for maxing out their excellent draft positions as the contracts for last season’s rookies move into their last year.

The Rams put together a ten man class with nine keepers who produced at varying levels.  Brockers suffered a high ankle sprain in the preseason that kept him from being the beast the Rams expect moving forward.  The second round was especially productive.  Wide receiver Brian Quick has all the measurables, but had difficulty adapting from the level of play at Appalachian State to the NFL.  Cornerback Janoris Jenkins was dynamic, and running back Isaiah Pead learned the league while helping back up departed work horse Steven Jackson.

Corner Trumaine Johnson showed flashes as a third rounder, and wide receiver Chris Givens set an NFL rookie record by catching a pass of 50-yards or better in five consecutive games.  Kicker Greg Zeurlein was money for the early portion of the season, and running back Daryl Richardson was outstanding as a change of pace back.

If the Colts and Rams are able to pull off the same magic they showed last year in caulk some of their seams, both teams will take another step forward.

I have no inkling who either team will take, but GMs Ryan Grigson and Les Snead don’t either.  There is nothing to do now but continue tweaking the evaluations and building their boards.  On Thursday night, the first round will unfold, and either quarterbacks will start to go before the Rams and Colts pick or they won’t.  Both hope and pray along with Geno Smith, Matt Barkley, and E.J. Manuel that teams without their signal caller set in stone start grabbing them.

For every quarterback taken, it’s as though both the Colts and Rams move up one spot.

Winning in the NFL is about timing, and timing is about luck.  The Rams and Colts have picked the right time to be very bad, and then another right time to be pretty good.  That, and the maturation of the young talent currently on the roster will close the gaps on the championship caliber teams, and then create separation as the Colts and Rams become elite themselves.

See you in Los Angeles, or wherever the hell else Roger Goodell decides Super Bowl L should be held.