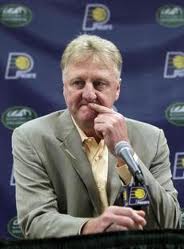 Larry Bird never wore a suit as easily as the Celtics green and white, but he drafted with the same excellence as he played.

Watching the Pacers NBA Playoffs win yesterday against the Atlanta Hawks, it was impossible not to see the immense impact Larry Bird had in building the roster.

Makes sense, doesn’t it?  I mean Bird ran the draft for nearly a decade, so the roster is damn near all him.  But the hell he took for making what occasionally seemed debatable picks has been shown to be the product of uninformed minds.

The prevailing logic – and a good case can be made for this perspective – was that the Pacers needed to hit rock bottom to be able to climb back to relevance.  That never happened, and Bird was unapologetic for not tanking games late in a losing season, or destroying his roster to hasten the Pacers’ demise.

When the Pacers were unable to get the player they wanted, they used picks to acquire other players via trade.  Bird did that exceptionally well also.

Let’s break down every draft since 2005:

2005 – Danny Granger (17th overall) – The five players who immediately preceded Granger in the draft were Yaroslav Korolev (12th – Clippers), Sean May (#13 – Bobcats), Rashad McCants (#14 – Timberwolves), Antoine Wright (#15 – Nets), and Joey Graham (#16 – Toronto).  Korolev played a total of 34 games for the Clippers.  May played 119 games until 2010 and is currently a part of the Paris-Levallois ballclub in France.  McCants averaged 10 ppg in five seasons for Minnesota and Sacramento.  Wright started 96 games for four teams in six NBA seasons, and has seen the world since – playing in China, Spain, Venezuela, and Reno.  Graham averaged 5.9 ppg and started 84 games for three teams.  We can dig back one more pick to #11 for the Orlando Magic.  Fran Vasquez never left Spain.  Granger has scored more than 2,000 more points in his career than those six players combined.

2006 – Shawne Williams (17th overall) – Yeah, Williams was a bust, but history has shown this to be a miserable draft.  Bird could have had the prescience to draft Rajon Rondo, who fell to #21 and the Celtics.  There were plenty of teams who drafted prior to the Pacers who managed to take a significantly worse player.  How about Patrick O’Bryant and Mouhamed Sene, who went to the Warriors and Sonics at #9 and #10.  I’ll even give the Bobcats a bit of a break for taking Adam Morrison at #3.

2007 – Pick traded to Atlanta for Al Harrington and John Edwards (not the cheating prick of a presidential candidate) – Atlanta used the pick to grab Acie Law, who washed out after the 2010-2011 season.  He’s currently in Greece.  Thaddeus Young was taken with the pick immediately following Law’s, and while starting for the 76ers is nothing but resume’ padding, he’s a very functional player who averaged 13 ppg over his six seasons.  Not-so Baby Al scored 15.9 ppg for the 35-47 2006-2007 season.

2008 – Roy Hibbert (#17), Brandon Rush (#13) – This is a complex draft as the Pacers acquired a bunch of people who were here briefly for their 11th overall pick – Jerryd Bayless, who didn’t last long in Portand either.  They also got the #17 along with others for Jermaine O’Neal, in what might be the biggest fleecing in the history of the franchise.  O’Neal’s contract was disproportionately huge compared to his production, so they dumped him for T.J. Ford, Maceo Baston, and Rasho Nesterovic and the draft rights to Roy Hibbert.  To get anything that looked like a basketball player for O’Neal’s contract was a slice of genius.  That they got a guy who can play center at #17 was genius.

2009 – Tyler Hanbrough (#13) – This is where Bird briefly lost his mind.  Hansbrough is very popular in Indianapolis because of his work ethic, and because he looks a lot more like the majority of the fans at Bankers Life Fieldhouse than the rest of the Pacers.  Jrue Holliday, Ty Lawson and Jeff Teague went #17, #18, and #19.  Hanbrough can be a valuable component on a very good team because he is a massive pain in the ass for opponents.  Every great team needs a dirty work guy, and Hansbrough is as good at that as anyone in the NBA.

2010 – Paul George (#10), Lance Stephenson (#40) – George is the only player taken in this draft to earn a trip to an all-star game.  Remember all the quizzical glances of Pacers fans when the pick was announced?  “Who?  Paul who?  Christ, Larry!”  He was taken one slot after Brownsburg’s Gordon Hayward.  I wanted the Pacers to trade down and get Eric Bledsoe.  Again, Larry knew what the hell he was doing.  In the second round, Bird grabbed a freshman from Cincinnati, and that pissed me off.  Everyone knew the kid from Coney Island was squirrelly and selfish.  There were charges that were dropped in an assault against his girlfriend.  Stephenson reportedly shoved her down a flight of ten stairs after she came home drunk.  The story circulated that the girl was paid to drop the charges.  Stephenson was said to be the most talented player on the Pacers from the moment he walked through the door, and now it seems that the maturity Larry asked for while Stephenson grew up a little bit has paid off.  Once again, Larry appears to have been right.

2011 – Kahwi Leonard (#15) – Leonard was a Pacer for only a second or two as he was traded for guard and Indianapolis native George Hill.  This was a great deal for both teams.  The Pacers are thrilled with the play of a professional like Hill, and the Spurs have someone who can tutor their elderly players on how to best use social media.  Leonard averaged 11.9 ppg as a starting wing.  Hill averaged 14.2 ppg and 4.7 assists.

2012 – Miles Plumlee (#26), Orlando Johnson (#36) – Way too early to tell whether either guy will become a meaningful contributor.

Bird’s legacy as the franchise’s steward will be as outstanding as it was as a coach.  He was patient and thorough.  That he was a little bit prickly about criticism was a surprise, but he was.  He developed a serious dislike for his critics, which seemed senseless to me as he is Larry F**king Bird, and should be above responding to critics.

Regardless of his disposition, the guy did his job like he has done everything – exceptionally well.  If the Pacers move on to the Eastern Conference Finals, which they should if they can stay focused every game through the first two rounds, Bird will have done the near impossible – rebuild an NBA team through the draft while never picking in the top nine.