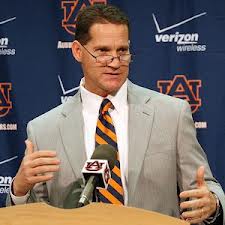 Two lessons from former Auburn football coach Gene Chizik – back your guys so they stay quiet, and don’t wear reading glasses at the podium.

Former Auburn football coach Gene Chizik is busying himself this week by defending his brief and erratic reign against a report by Selena Roberts that quoted former players as saying that players were paid, grades were fixed, recruits were excessively entertained, and that a significant number of players tested positive for synthetic pot.

He’s being paid just over $208,000 a month for the next three years by Auburn, and that buyout cash is available to Chizik only if the program is clean by NCAA standards.  That he is strident in calling the work of a well-respected journalist “absurd” is predictable – and itself absurd.

The system is broken.  When a coach can fail to the tune of a $7.5 million buyout like Chizik did, the hog is in the tunnel.  Here’s another relevant Hunter Thompson quote, “In a closed society where everybody’s guilty, the only crime is getting caught.  In a world of thieves, the only final sin is stupidity.”

College football is a closed society, and the truth is that cheating happens everywhere whether or not it’s sanctioned by the schools.  It’s been that way since the beginning of football, and no amount of grave consternation or self-righteous posturing is going to change that.

Coaches for big-time college football programs are not paid to make sure student-athletes graduate with meaningful degrees.  Boosters do no write giant checks to the athletic fund because players are sober.  Fans do not filled stadia because the players earn their grades.  The meaningful metric is winning, and from winning all good things spring.

The only danger is in the loose lips of the players who may not even realize that what regularly happens to and for them is against the rules.

A society where the rules and the reality are so wildly divergent cannot function happily for long, and the perpetuating acts of the NCAA is to load their musket with one lead ball per year to take down one of the many programs that operate by the laws of the pack rather than their rulebook.

Auburn is doing everything they can to stave off the investigators as long as they can, but eventually the musket will be fired.  The damage is likely to be restricted to Chizik and maybe athletic director Jay Jacobs.

Anyone looking for a fix for this problem will first have to find people who believe a problem exists.  More money is being made today in college football than ever, and when the SEC Network launches in 2014, today’s cash will look like a short stack.  The kids are happy – easy classes, getting some cash from boosters and agents, and a chance to play on Saturday in front of crowds that dwarf what the NFL draws.

Schools are thrilled.  They have a business model that allows them to print money without compensating the people doing the work.  Coaches are REALLY happy.  Sure, the job sucks sometimes, and the pressure to win is immense, but they take home huge money.  And if somehow the ship capsizes, they get buyouts totaling more than most ordinary folks will earn in their entire lives.

Fans are happy because their teams are able to compete with the other teams in their conference, and may go to a bowl which provides them a chance to hop on a plane, drink scotch, smoke giant cigars, and congratulate each other for attending the same university as is playing in the game 40 years before.

Mark Emmert, the head guy at the NCAA, is a smart guy.  He knows what the score is.  If I know that people are getting paid and that academics is the farthest thing from the minds of most coaches, surely it hasn’t escaped him.  Like most administrators, his win is for the noise to stop. Emmert gets testy when constantly quizzed about corruption that he has no power to end.

Maybe the problem is with the people who continue to see any of these issues as the problem.  The time has come to – as my Dad used to say – crap or get off the pot.

The root cause of college corruption is the sway the boosters hold because they write giant checks to the athletic fund that build buildings, endow scholarships, and fund buyouts.  All the program needs to do to keep the cash tap flowing is win, so what needs to be done to make winning more likely is done.

Let’s do what Vanderbilt did almost a decade ago, dump the athletic department.  Fold that beast into the division of student life.  If boosters want to pour money into the general fund, that’s great, but it will go to make collegiate life better for all students.

Winning becomes less an issue, and as members of the gen-pop, the athletes are held accountable as students.  Coaches go back to being coaches rather than wardens, and ADs cease to exist at all (apologies to one of the great guys in this mess, Indiana University’s Fred Glass).

It will never happen because solutions require problems, and while Chizik has a problem today of weathering this storm so the $208,000 checks continue until the end of 2015, but that’s an isolated issue that won’t infect the rest of college football.

It’s not Chizik’s fault, but it’s someone’s turn to get shot with the musket.