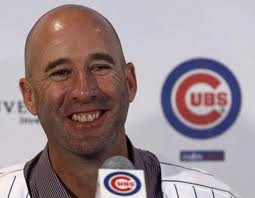 Save this picture. Unless he’s gritting them, you likely won’t see Cubs manager Dale Sveum’s teeth until 2015.

There is only so much a man can take.  Dale Sveum is the manager of the Chicago Cubs, but he’s a competitive human being first.  He’s tired of losing.

Sveum vented last night before the Cubs blew another save – this one in the 13th inning – to lose to the Cincinnati Reds 5-4.  Imagine his mood after.

Sveum said that everyone is accountable, and that jobs are on the line for everyone.  Sure they are.  Starlin Castro has been the same sleepy boob from day two of his major league career, and the consequences have included coddling, enabling, and waiting patiently for the light to go on.

The Cubs hired Dave McKay, a great move, to try to instill some St. Louis Cardinals style professionalism.  So far, Castro and the Cubs are mired in the same swamp of malaise that has defined the franchise for the past four years.

It’s hard for a manager or coach to lose, even when the team is built to avoid success, and it sounds like Sveum is getting to the end of his rope.  He’s even talking about his own job being in jeopardy.  Right now, a firing would be a mercy killing.

The child of Billy Martin and Tony LaRussa couldn’t win 70 games with this odd bunch of spare parts.  The Cubs keep churning bodies hoping that someone can adequately hit, catch, throw, run, and hit for power – or any of those five tools.

This insanity will continue for at least another season, as Sveum waits for the arrival of the young talent the Cubs are stockpiling in the low minors.  They will earn draft picks at or near the top for the foreseeable future, and maybe team president Theo Epstein and general manager Jed Hoyer are right in that making a conscious effort to lose 100 games a season for a while will yield the level of success never seen at the nearly century old Wrigley Field.

In the meantime, poor Sveum may lose his mind.  Maybe he’s trying to shake things up as the Cubs certainly appear to be aware that they are as miserable a collection of ballplayers in the long and recently mediocre history of the franchise.

The Cubs are hitting less than .150 with runners in scoring position, and the bullpen has already blown five saves – by five different relievers.

The Cubs rank at the bottom of the National League in walks with 42 – less than half the total of league leader Cincinnati.  If not for the Hitless Blunders playing in Miami with an incredible .212, the Cubs would be in last place in batting average and OBP too.

Fielding is not a strength either.  The Cubs rank next to last in both fielding percentage and errors.  They also lead the National League in unearned runs scored against them with an astronomical 14 in just 18 games.

Yes, the Cubs are terrible, and there is no hope at all for more than marginal improvement throughout this season.  If Sveum is threatening jobs, and even questioning his own, it won’t be long before he makes former Cubs manager/volcano sound like a choirboy with an outburst of historic proportions.

The fans at Wrigley Field will start to become ill-tempered as well.  They should.  But their rage should be directed away from the angst-ridden Sveum and toward the self-impressed billionaire pulling the strings.