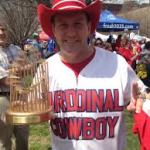 There are idiots everywhere.  Some are just easier to find.  I guess we should all thank the super fans for making that process incredibly simple for us.

Unless these people are somehow mentally challenged, or are using their pseudo-celebrity for the good of a charity, although I can find no evidence of either psychosis or altruism in those pictured, super fans should put away the costumes and enjoy the games like the rest of us – as observers.

They are a pox on the sporting events they attend, and near as I can tell, the first guy who entered this troubling realm was the rainbow-wigged buffoon who showed up at professional golf tournaments with his John 3:16 sign.  If somehow there was a chance in hell, (excuse that phrase), that any of the Male 45+ demographic that falls asleep during Jim Nance’s somnambulistic descriptions of the ‘action’ could be compelled to read a bible passage because he held up the sign, I might see some sanity in his efforts.  There was and is no chance at all – none, zip, absolute zero – that even one non-deranged, half-asleep golf fan converted to Christianity because of the rainbow wig guy. 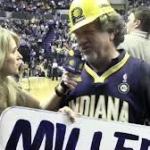 Unsure of this guy’s name, but he’s been a ridiculous staple of Pacers games for many years

And so it is with the weirdos who get all gussied up to pose for pictures with amused fans.  These addle pated nuts see people in the grandstand staring at them and infer acceptance and popularity.  Boy, are they way off.  There is incredulity.  There is mocking.  There is derision.  There is pity.  There might even be some guilt.

Fame is not a goal.  It’s a result.  Jeffrey Dahmer was famous.  He ate people in Milwaukee.  Carrot Top is famous.  He’s a prop comic.  Johnny Knoxville is famous for shooting bottle rockets out of his ass.  Martin Luther King Jr. is famous.  Payton Manning is famous.  Tom Hanks is famous.  None of those people have any common trait unless Hanks has a diet that is not on the typical restaurant menu or a trunk filled with funny knick-knacks. 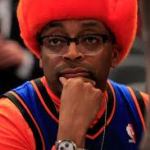 The combination of the ability to dress like an idiot and the funds to buy front row tickets does not put anyone in a position to create interest in me with signs or histrionics.

They need to put away the costumes, and merge with society.  They should introduce themselves to people.  Start a conversation.  Be a guy that people like instead of ogle.

The ridiculous make the rest of us feel normal, and for that we can thank Spike Lee, but I would rather he find a new hobby and return the orange hat to the hunting section at Cabela’s.