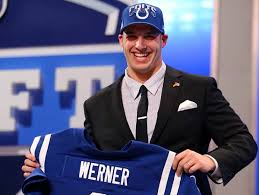 Bjoern Werner is a violent tackler who will make Colts fans very happy, if the experts are to be trusted.

The Colts hope the extra ‘e’ in Bjoern stands for effort, excellence, and efficiency.

The shiniest new Colt was projected much higher in the draft before the pedestrian 4.83 Bjoern Werner ran at the Combine, but football isn’t a track meet.  Unique sets of athletic skills yield different levels of productivity on the field.

The issue with the Colts selection isn’t whether they got a player who will fill a need at a high level, it’s whether they might have been able to parlay that pick into a second difference maker by trading down to recover the second rounder lost in the trade with the Dolphins for Vontae Davis.

While Davis is a better player than any CB left in the draft, which makes the trade productive, the Colts have some holes to fill on the offensive line and cornerback.

Unless trades come today or tomorrow, the Colts will have five more selections – a third, fourth sixth, and two sevenths (they own the last pick in the draft and will welcome Mr. Irrelevant to Indianapolis for the second straight year).  They spent some cash in March to plug holes with nine free agents that will upgrade both the offensive and defensive lines, and defensive backfield.

The question will remain just how much did the Colts help themselves by adding these 15 players between the draft and free agency?  They got tonnage in free agency and quality in the first round of the draft.

The question in free agency is always why did the original team allow the player to become a free agent and leave.  The Colts basically swapped CB with the Cardinals, and the Colts signed Greg Toler to a three-year, $15M deal, while Jerraud Powers moved from Indy to Arizona for three-years and $10.5M.

Another swap was made by signing Darius Heyward-Bey after the departure of Donnie Avery.  Heyward-Bey is two years younger with similar speed and slightly better hands.

Free agent signees guard Donald Thomas (four years, $14M) and tackle Gosder Cherilus (five years, $34.5M) will hopefully help build a wall between angry defensive lineman and the franchise.  As was the case with Peyton Manning, if Andrew Luck goes down and can’t get up, fold up the tent and go home.

Watching the Colts operate reminds me of an inveterate gambler who just went on a massive heater at the craps table, and wants to parlay those winnings in enough cash to move to the high stakes table.  That 11-5 record was achieved through the incredible athleticism of Luck, special teams magic, and timely turnovers (they were 8-1 in games where they forced a turnover).

Whether signing a bunch of hole pluggers and drafting six youngsters with only one of them falling in the top 85 picks can allow the Colts to match that 11-5 mark will be answered beginning in September.

Mike Mayock of the NFL Network is a smart guy who attends the Senior Bowl, Combine, and a bunch of pro days, including Werner’s at Florida State says, “I think (Werner is) really a good fit for Chuck Pagano. Very similar player by the name of (Paul) Kruger that he drafted in the second round when he was with the Baltimore Ravens. He will thrive in a Chuck Pagano system.”

Playmakers win games, and after an offseason of signing hole pluggers, the Colts got a guy they hope can be a difference maker.  There’s a lot of hoping being done in Indy.  Whether the Horseshoes can slide to table where they big boys play for championship won’t be known for another eight months, but what decision to draft Werner and those that are made on 56th Street the next two days will have a lot to do with it.

One thought on “NFL Draft – Colts Get Bjoern Werner at #24”