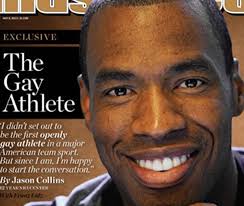 I didn’t think much about Jason Collins as he played 12 years in the NBA as a guy about whose sexual preference I didn’t care, and nothing that happened today changed that.

By all accounts, he’s a great guy if a relatively mediocre player.  That’s interesting to me.  What he or any other player in the league does in his bedroom or hotel room on the road bores me.  That he’s gay doesn’t change that.

Collins is being lauded as some modern day Jackie Robinson, which is an overreach in the same way a passenger on a Southwest flight from Indianapolis to Chicago is an astronaut.

It takes guts to be the first anything, and Collins is the first active major league athlete to come out. Anything that takes guts should be applauded, I suppose, but if the line Collins crossed is a big deal, it shouldn’t be.

I’m not indifferent to the pain-inducing stigma that some still attach to being gay, but catering to the fear-based thinking of stooges with nothing better to be repulsed by than the romantic life of a man who is attracted sexually to another man is a waste of time and energy.

If coming out in a self-authored piece in Sports Illustrated makes Collins feel better, it’s good to feel better.  And if Collins coming out makes other gay men feel better about being gay, I feel terrible for them.

Sexually, we are who we are, and if whatever happens between the sheets is between consenting adults, have at it.  People who judge many times reveal their self-loathing as they proclaim others aberrant.

We seem to be heading for a time when people find better reasons to dislike one another than race, religion, and sexual orientation.  If Collins words take that glacial evolution another step forward, great.  But I’m looking forward to a time when it’s unheard of for anyone to feel the need to be loud and proud.

All of us should have reason to feel pride.  It should be for living a decent life, not for the manner in which we have sex or with whom.