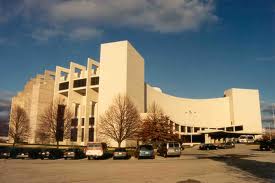 The one and only Assembly Hall. Not perfect, but definitely unique in design – and now in name.

After a 42 year battle of Assembly Halls, the basketball arena at Indiana University can now claim victory.

The Assembly Hall at the University of Illinois will be known for at least the next 30 years at the State Farm Center as a result of a $60-million deal announced yesterday.

Illinois’ building is 50 years old, so it predates the iconic building in Bloomington, Indiana, but tempers in Champaign would often flair as college basketball fans would hear that their arena was called Assembly Hall and respond, “Oh, you named your place Assembly Hall too?  Just like Indiana, huh?”

That confusion will be mitigated by this deal, but there has never been any puzzlement over which Assembly Hall has enjoyed the most success.  While Indiana has had three National Champions call their Assembly Hall home, the only NCAA Tourney winner in the State of Illinois was Loyola of Chicago 50 years ago.

Illinois has had difficulty since the departure of Lou Henson as both Lon Kruger and Bill Self used the head coach position there as stepping stones to better jobs.  Bruce Weber enjoyed some success while coaching Self’s recruits, and now John Groce is trying to rebuild the once proud, but ultimately unsuccessful program.

Groce is an outstanding coach, and might be able to overcome the hurdles that have kept the Illini mired just outside the conversation of nationally relevant programs during those eras that they refused to succumb to the temptations of wandering outside the boundaries set by NCAA rules.

Now, that team will play in the State Farm Center, while Indiana plays in the one and only Assembly Hall.