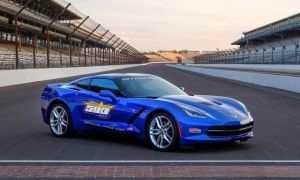 The Corvette Stingray is the perfect Indy 500 pace car.

There are still roars at 16th and Georgetown as IndyCars hit 230 mph circling the world’s greatest race course, just not for as long as they used to.

The Month of May used to mean the whole month, but in 2013 it means from Saturday, May 11th to race day on Sunday, May 26th.  In between, there will be practices, quals, and Carb Day.

This is a civic celebration like few others, but the race itself recedes each year just a little bit further in the minds of American sports fans.

In Indianapolis, we are so completely enveloped in the pomp, circumstance, and history of the Indianapolis 500 that we fail to notice that there are an extraordinary number of American men under the age of 30 who are blissfully unaware that it exists.

I spent the last two years in St. Louis – just 241 miles or an hour and ten minutes away by IndyCar – singing the gospel of the Greatest Spectacle in Racing.  There are hundreds of St. Louisans who now know because of my constant chatter that the start of the Indy 500 is the most exciting moment in sports, and it isn’t close.

A seat in Turn One for the start is both thrilling and terrifying as 33 Dallara chassis dive into the corner three wide at over 200 mph.  It’s completely insane, wonderful, death-defying, and life-affirming.

For years, I have listened to Indianapolis Motor Speedway historian Donald Davidson tell stories of the Novi, Parnelli’s turbine, Mario slowing down, and Mauri Rose practicing during his lunch break from Allison.  I was at the track in 1996 when Scott Brayton spun and died in a terrible crash in turn two.

It’s with pride that I tell people about the magic at 16th and Georgetown, but at some point the Speedway is going to have to act to engage fans.  People outside a 100 mile radius don’t look forward to the Indy 500 anymore.  There are no meaningful rivalries, no villains, and the cars are all identical.

Other than the rich history of the event, there is no reason for a person in St. Louis to come to Indianapolis despite its proximity (and love of beer) or watch on TV.

Nice guys driving in circles is not going to win the race for eyeballs.  I love the month and the race, but grew exhausted trying to convince people in St. Louis that it’s still relevant.

The Hulman George Family and Hulman & Company CEO Mark Miles owe a more interesting message to the people carrying the face-to-face marketing to the streets throughout the midwest on their behalf.

If you have never been to the Indianapolis 500, it should be on your sports bucket list.  Believe me when I tell you it’s worth the trip to see the enormity of the place, the pre-race fooferah, and the first lap.  You have never seen anything like it.

Miles and the Hulman-George Family will have to make you want to come back.