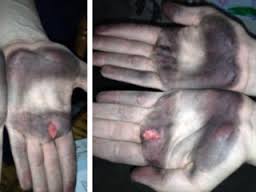 These are two of the hands that will be whole again in a week or two. (courtesy theindychannel.com)

So it’s finally come to this – anything bad happens to your son or daughter at school, and someone needs to be fired.  Ding-a-ling parents of thousands of kids demand that their rugrats be treated as the special little presents from heaven that mommy and daddy know them to be, and if a teacher/coach doesn’t sign on, mommy and daddy take their case to administrators who would rather can a teacher than face a spurious lawsuit.

Here’s what happened this time – some kids on the Cascade High School (Clayton, IN) track team blew off a practice, so they could prepare for the prom.  Coaches meted out a seemingly innocuous punishment – walking around the track between one and four times on their hands and feet.  They call it a bear crawl.

Some of the kids rubbed their hands raw during the activity, parents had a conniption, and now the coaches have been relieved of their track responsibilities (asked to resign, but the outcome is the same), and are being paid to sit at home rather than teach while an investigation is conducted.

Why can’t I be hired to conduct this type of investigation.  My report would read:

Check, please.  Thanks for your business!  Kent

For the media, a few blisters is front page, above the fold news.  There are pictures of the hands that look like a golfers after hitting 1,000 balls on the range.

There are a lot of ghastly things that happen to students at the hands of other students and teachers.  A few years ago, some arrogant seniors on the Carmel basketball team allegedly abused a freshman teammate by gooching him (ramming a thumb up his backside.  That was a mess that dominated news for months – and rightly so.

The parents of the abused player raged against the machine to earn some justice for their son, and the wake carried the coaching staff out of their jobs.  The kids were arrested for a misdemeanor or two, and were allowed to graduate with their class despite being (sort-of) expelled.

That was different.  Carmel involved a miserable violation of a 15-year-old’s innocence while adults stood by in indifference.  What happened at Cascade High is some kids defied their coaches, and the coaches responded by having the kids perform a silly task as penance.  According to the report in the Star, the kids support the coaches, even those with a boo-boo on their hands.

It’s impossible for parents to see the flaws in their children – that’s nature’s way of making sure that children are conveyed safely to adulthood – but they definitely need to take a step back to see the difference between a blister and an injury to spirit or body.

And the media needs to ask itself what’s really important.