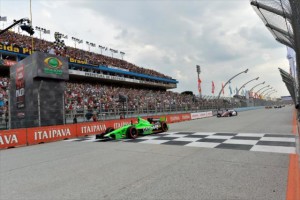 Last year during the Month of May, local microbrewery Flat12 Bierwerks brewed up a special beer in honor of affable Canadian and IZOD IndyCar Series driver James Hinchcliffe. It was called the Hinchtown Hammer Down ale.

Putting the hammer down is exactly what the Mayor of Hinchtown did Sunday, passing Takuma Sato in the last turn of the last lap of the Sao Paulo Indy 300 in Brazil to win his second race of the young season.

Sunday’s thrilling finish was an exclamation to what has been a very exciting first four races this year. The racing has been superb. The competition throughout the field has been fierce. If you enjoy any kind of racing at all and aren’t tuning into INDYCAR, you’re missing the best racing out there

As the focus now turns to the Indy 500, a number of drivers have a legitimate shot to drink the milk this year. In a series dominated by Team Penske and Target Chip Ganassi Racing over the years, numerous other teams are putting their stamp on the series and will continue to do so at Indy.

Sato heads to Indy on a career high, and who can forget the last lap excitement in last year’s Indy 500 as Sato spun in Turn 1 while trying to pass eventual winner Dario Franchitti for the lead. Nothing captured the moment better than the Japanese commentary:

A.J. Foyt wanted a driver this year not afraid to take risks, someone with what classic Formula One announcer David Hobbs would call huge attachments. Foyt has one in Sato.

Andretti Autosport has also returned to prominence and can fairly claim super team status. Ryan Hunter-Reay won the championship last year and already has one victory this year. Hinchcliffe also won the opening race in St. Petersburg, Fla., while Marco Andretti sits second in the standings.

Sure, the usual suspects will be in the mix at Indy this year. Helio Castroneves and Franchitti will be gunning to join the exclusive four time winners club, a group that includes Rick Mears, A.J. Foyt and Al Unser, Sr. But if the last couple of years and this season are any indication of what’s to come, many others will have something to say about whose face gets emblazoned onto the prestigious Borg-Warner Trophy.

This season has been crisp and refreshing, indeed – just like a pint of Hinchtown Hammer Down from Flat12.